Bob Pelham once said: “A puppet is not just a toy, but it has to walk, act and dance for someone!”  Because that’s what puppets are all about. They seem to almost yearn for life. They dream of action. Their entire wooden ambition is to become animated.

Through the Story Book Puppet Theatre “Mr BuzzKing” and the team aim to continue the tradition that Bob Pelham started and share the fun and magic of puppetry with children wherever and whenever they can. “Mr BuzzKing” is based in Staffordshire.  I’m not staging shows at this time, but hope to do so again later this year.

The 2020 Spring/Summer Programme was to feature a show, suitable for family audiences, (3+ years): Hansel & Gretel, followed by a puppet making workshop. In 2022 we’re hoping to begin presenting shows again, although at the present time it’s not possible to say what we’ll be able to arrange.

HANSEL and GRETEL – A poor woodcutter is searching for his children, Hansel and Gretel, who are lost in a dark, scary forest inhabited by a child-eating Witch! The gripping drama unfolds when he meets some unexpected characters deep in the forest.

Will he find his children in time, before they are cooked and eaten by the Witch?  Follow him on his journey that has an unexpected ending to the traditional story.

The puppet shows are suitable for children from 3 years old upwards and can be presented in schools, playgroups and libraries. The puppeteers operate the marionettes in full view of the audience so children can see how the show is staged. The aim of the project is to introduce children to puppetry, marionettes or string puppets in particular. The show is followed by a puppet making workshop where children get to meet “Freddy the Frog” who helps them to make a puppet they can keep and take home with them.

The show is about 25 minutes long and the workshop is about one hour in duration. After the children have made their puppets, they have great fun taking part in staging their own show for their parents and other members of the audience. 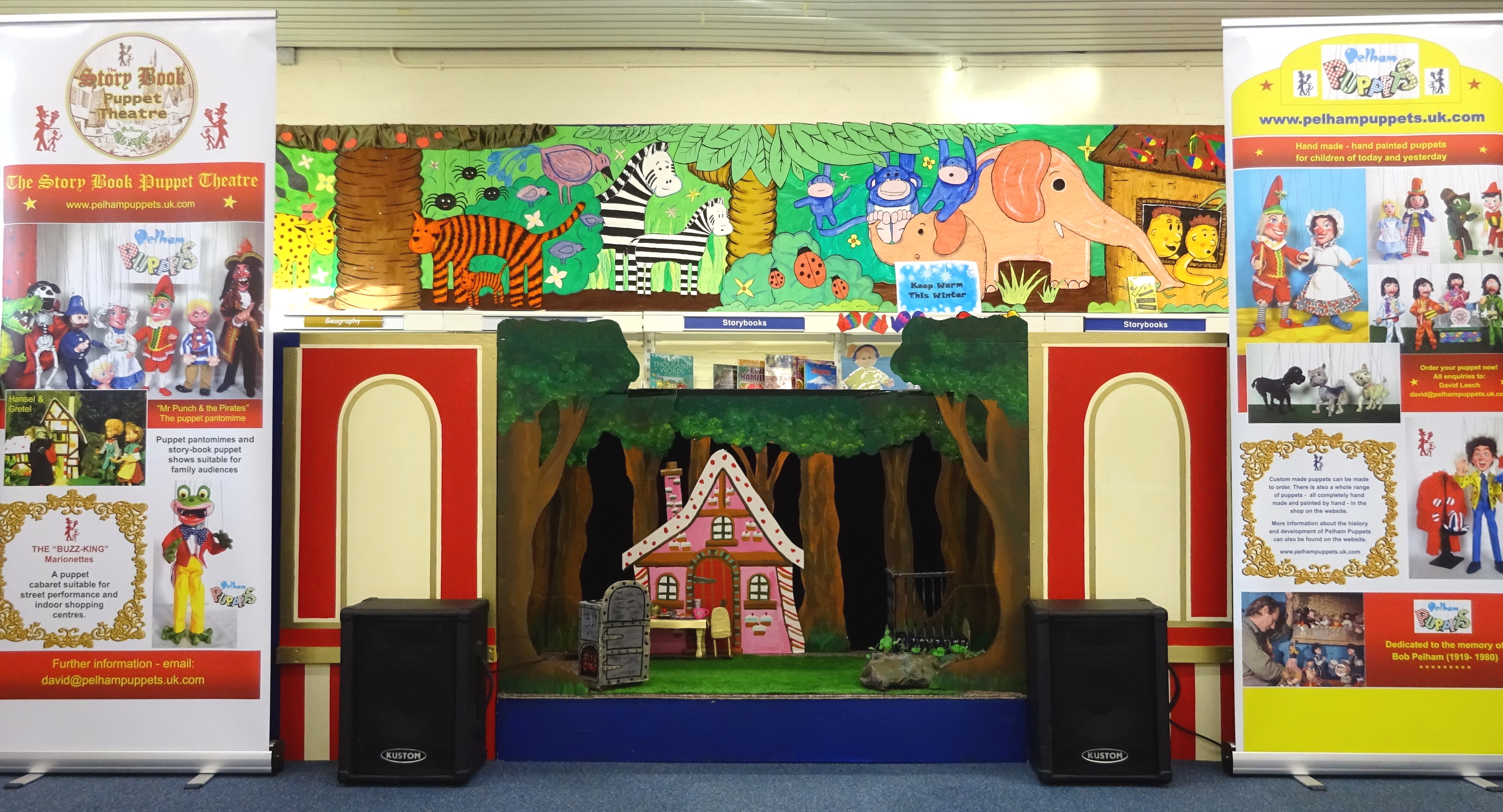 Above: The stage set up and scene for Hansel & Gretel within a library setting.

THE “BUZZ-KING” Marionettes – This is a musical cabaret, suitable for outdoor events featuring a variety of original entertaining characters, such as Freddy Frog, Pretty Penny and Doughnut, the Dancing Donkeys, Mickey Monkey, Harriot the Hippo,  and others, appealing to a family audiences. Mr BuzzKing has also created a tribute to the Beatles last performance together on the roof top of their Savile Row Studio building in January 1969. Each performance is about 15 minutes long and we can present one every hour up to five times a day.