In 1963 a total of 226,252 Pelham Puppets were produced making it a record year for the number of puppets produced.

A whole new range of characters mostly designed by Peter Carter-Page were introduced in this year. He was a respected Canadian artist who had previously worked for the Walt Disney Studios. Peter’s daughter, Rosemary, described her father as “a very nice man and a jack of all trades in the field of art and writing.” Certainly, his designs were beautiful works of art and Bob gave him total freedom to produce the original models from sketches and drawings drawn by both of them.

Above shows the “Animal Band” as featured on the front cover of PELPUP NEWS in Winter 1964 – a 6 foot wide centre-piece of a three piece Animated Display Unit totalling 18 feet wide. It went on display in Harrods that year and included all the new characters that had been added to production in 1962 and 1963. The photo on the right shows Peter Carter Page working on a display size giraffe head in 1961.

Bob wanted to increase the range of fairy-tale characters and introduced the King, Queen, Wicked Witch, Wizard, and the Giant. Carter-Page was directly responsible for producing the animal characters in the new range. 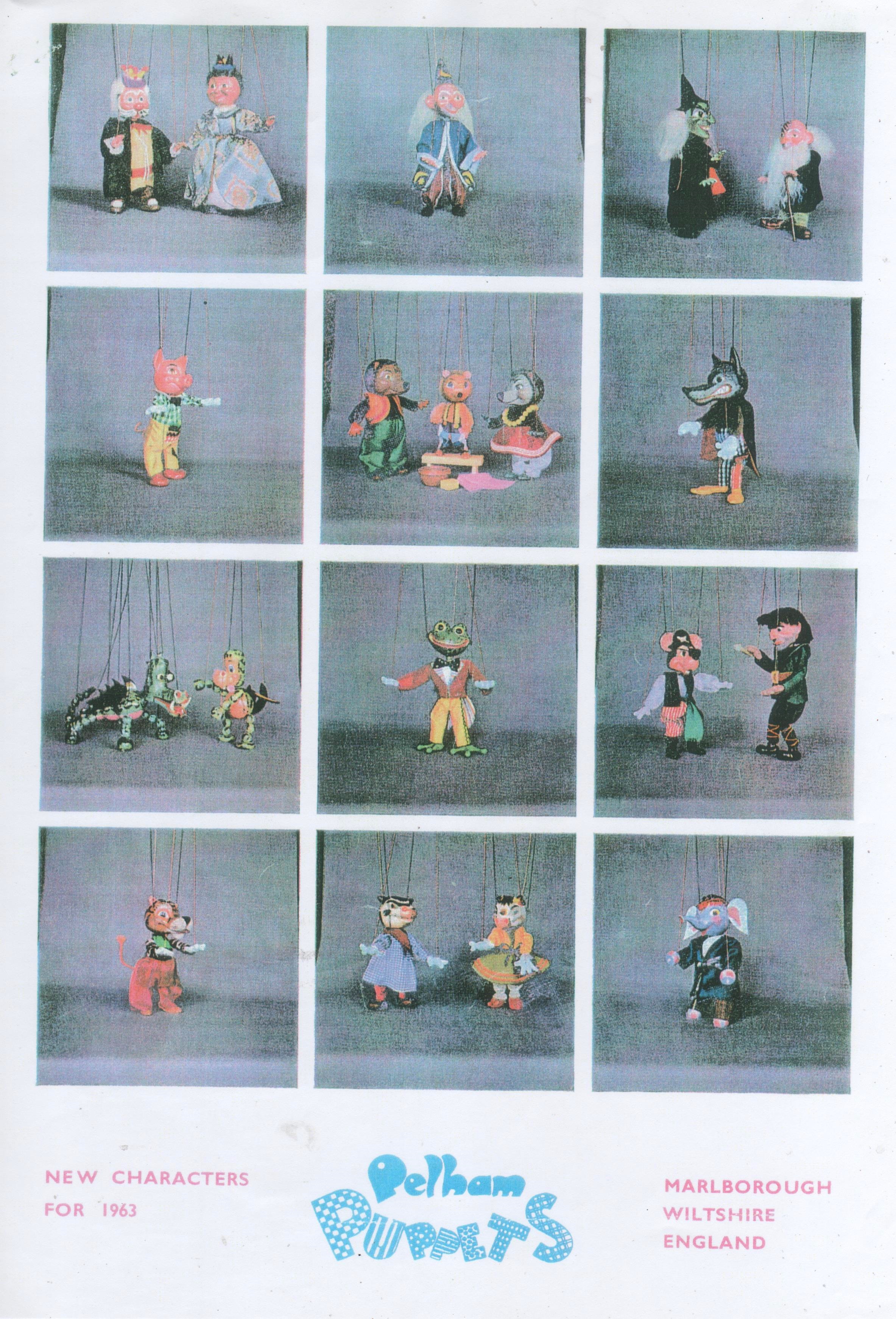 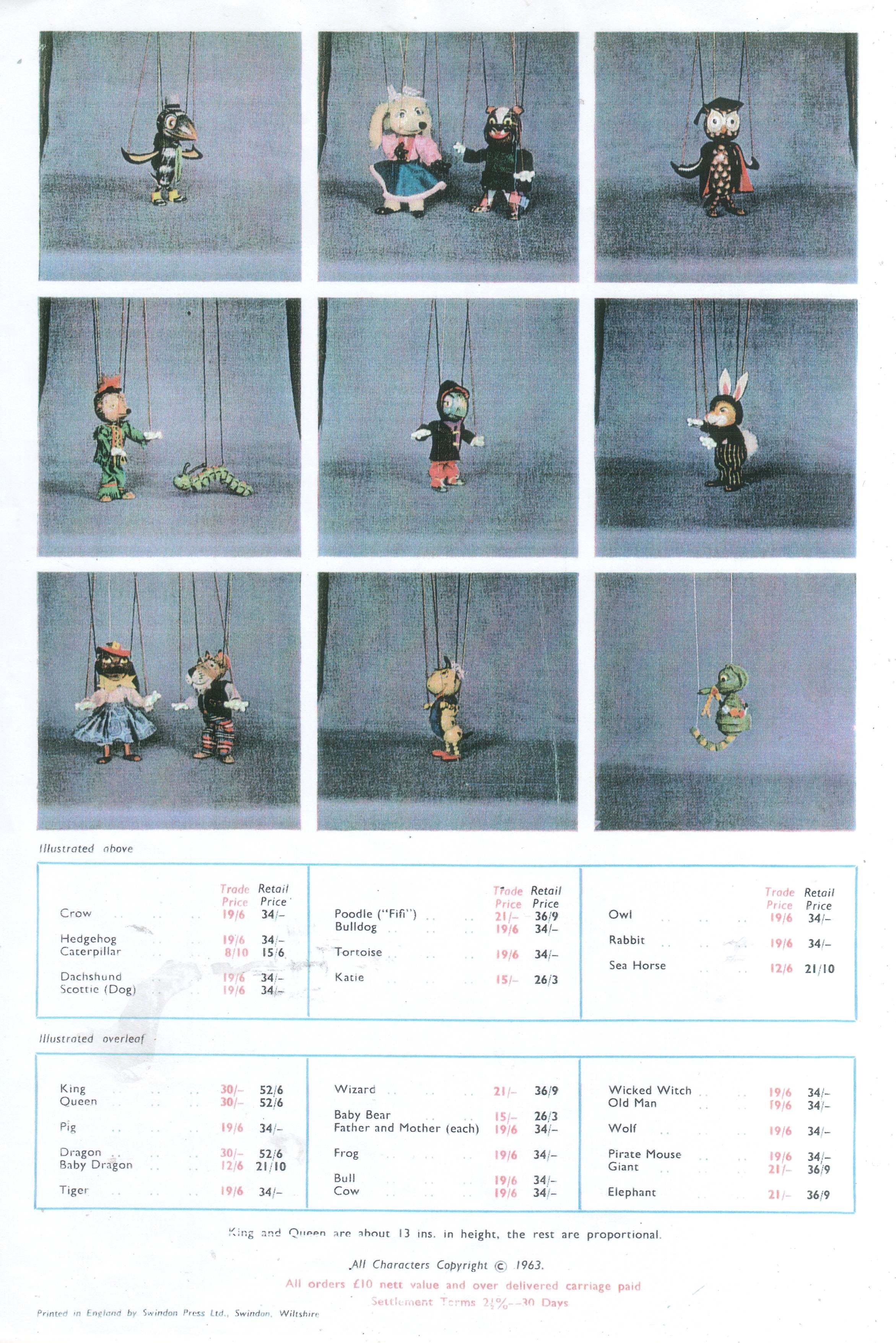 A full colour double sided sales leaflet was produced depicting thirty-one characters, although other characters were designed and reached prototype stage, not all went into production due to pressure of regular production.

As it turned out, despite their initial popularity with the buyers, they were expensive compared to other standard puppets. Although they looked good, they did not work as well as some other puppets. Some characters from the range did survive beyond 1968 when Bob sold off remaining characters that had poor sales figures through Pelpup News.

Below are the half-price characters as they appeared in Pelpup News, No 14 in 1967 and No 17 in 1969. The price for each puppet was 18/=  that is, 18 shillings or 90p or only £16.00 in today’s money! (The normal retail price would have been 36/= of course. The retail price in some shops was often 42/= or £2.10p.) Some of these characters are considered ‘rare’ and sought after by collectors today and can exchange hands for a few hundred pounds, boxed and in good condition. 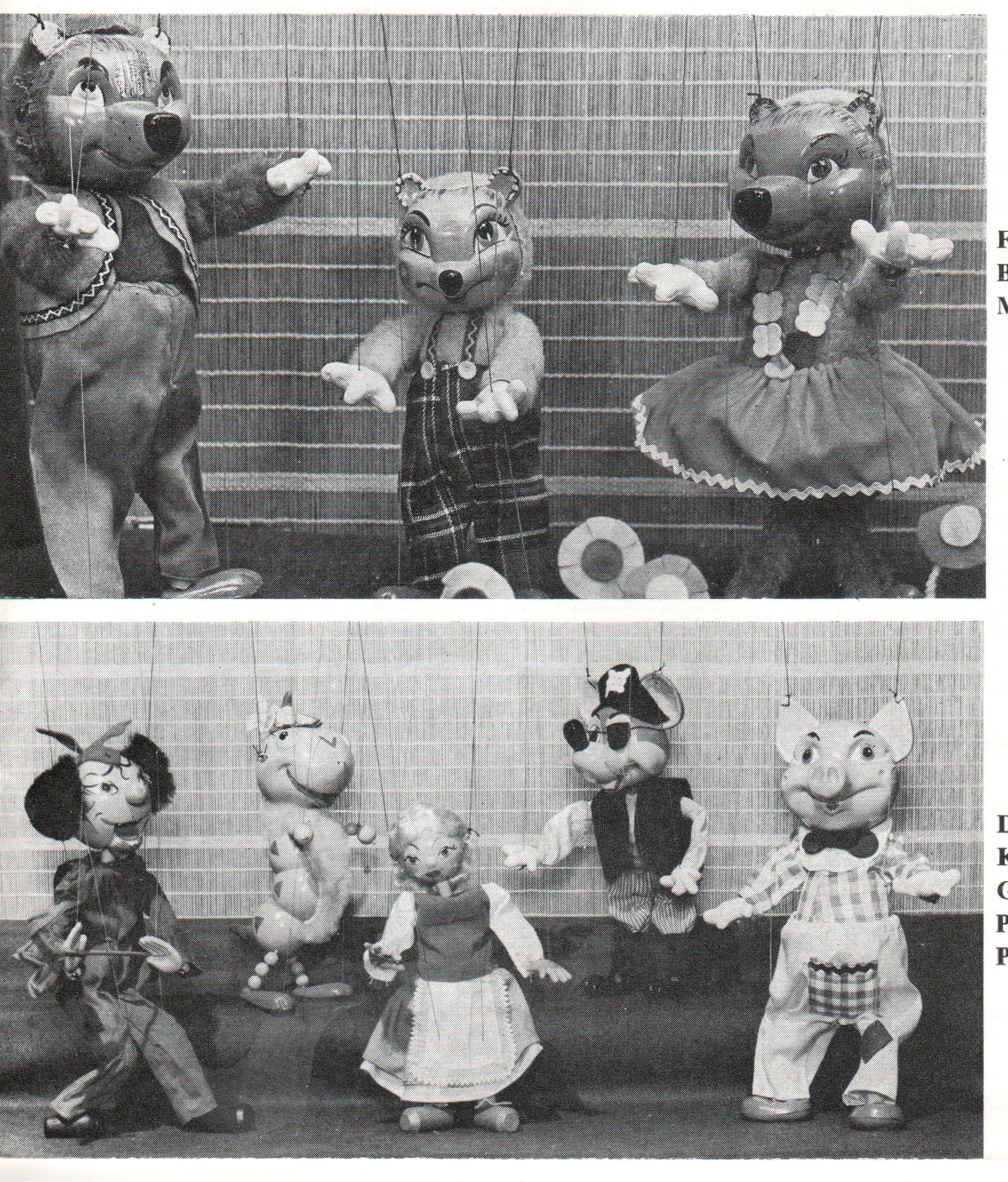 There were a total of 31 characters listed on the sales leaflet. They are pictured below. Today the prices paid vary greatly, depending on “rarity” and condition etc. My thanks to Imogen Parfitt for allowing me to use her photographs. They are listed here for information purposes only. If you wish to copy and share them, please ask permission before doing so, thank you.

Please note: I do not provide valuations for Pelham Puppets. If you have puppets for sale, contact Imogen. For information about the puppets from other collectors, visit the Pelham Puppets Face Book Group. 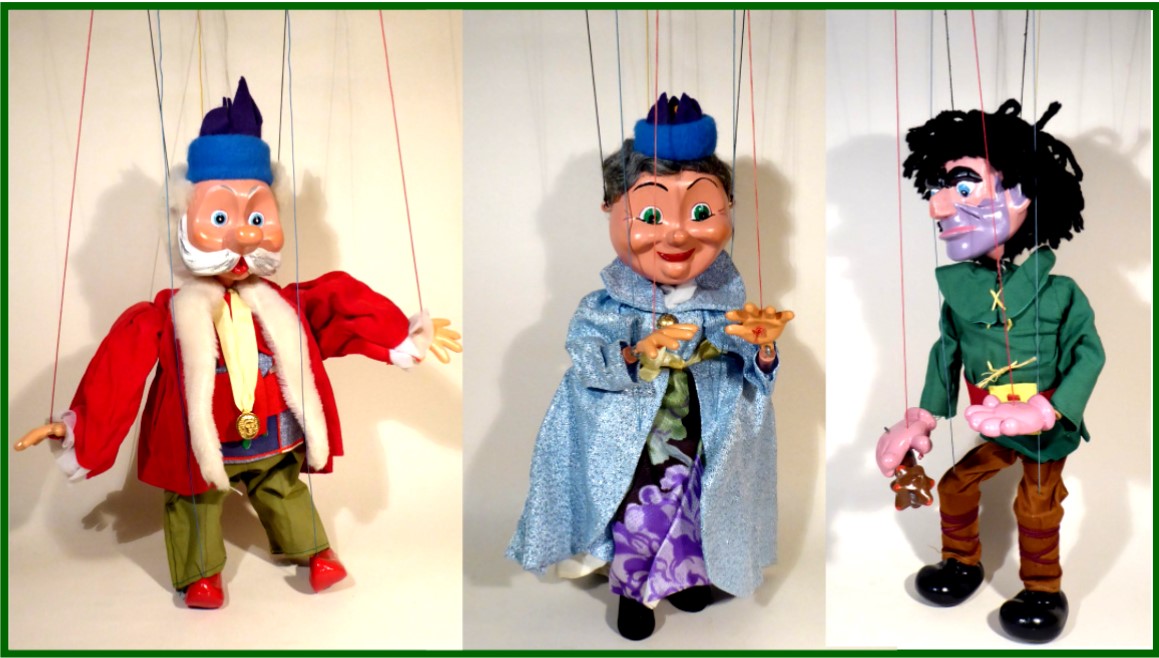 Left: The King  Centre: The Queen  Right: The Giant 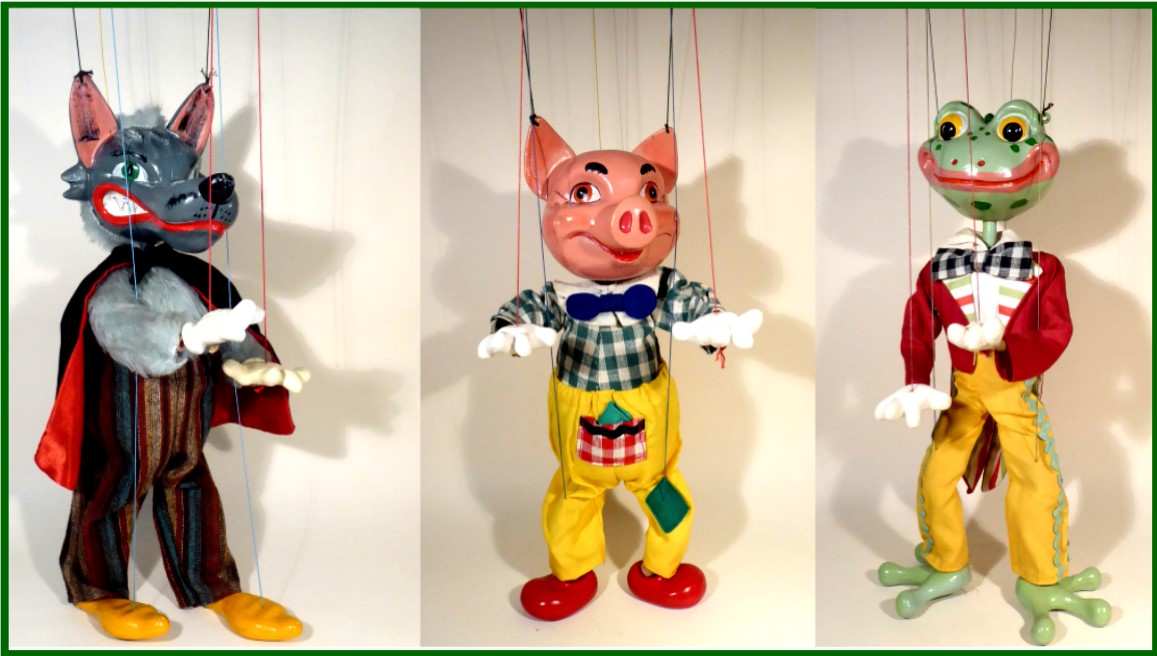 Left: The Wolf  Centre: The Pig  Right: The Frog 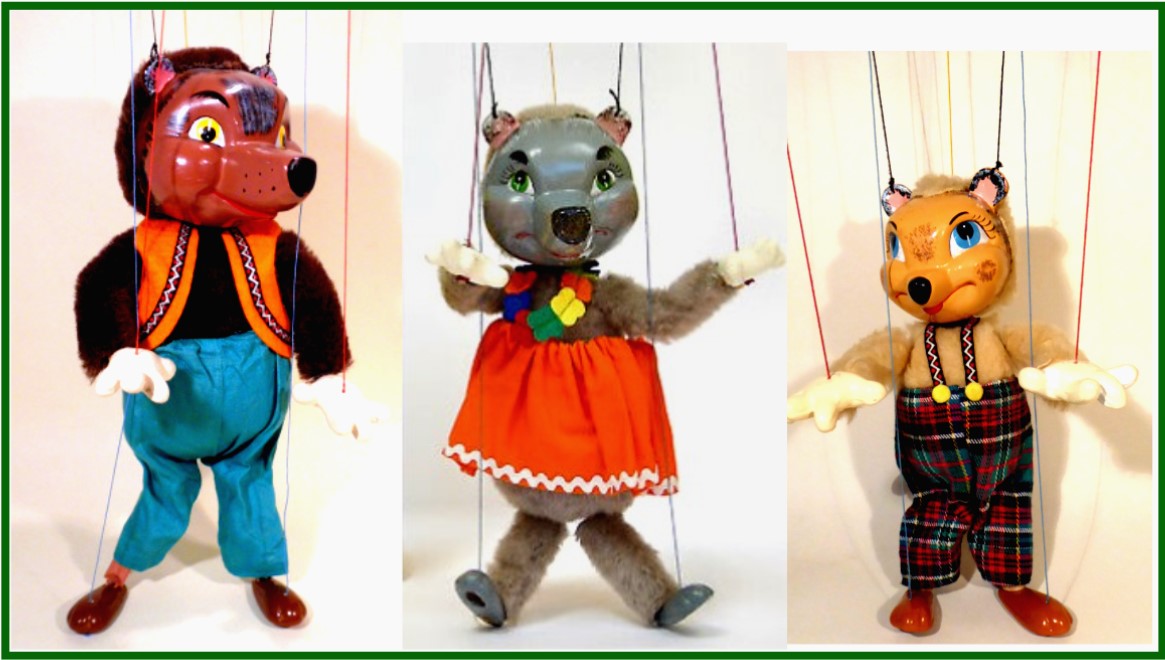 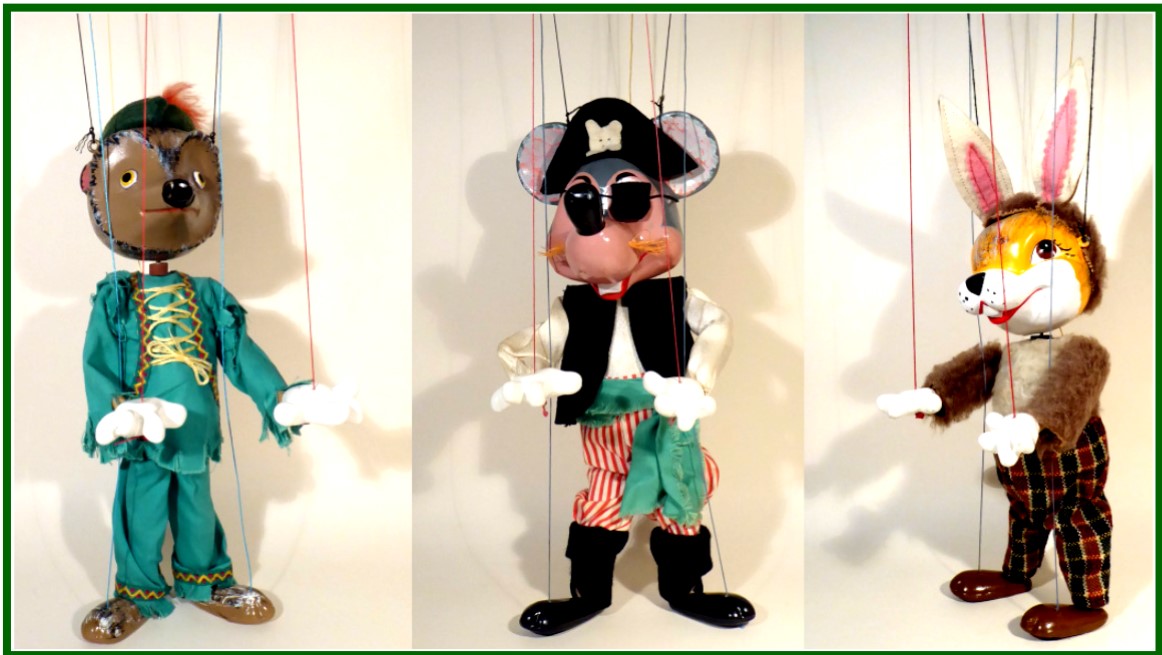 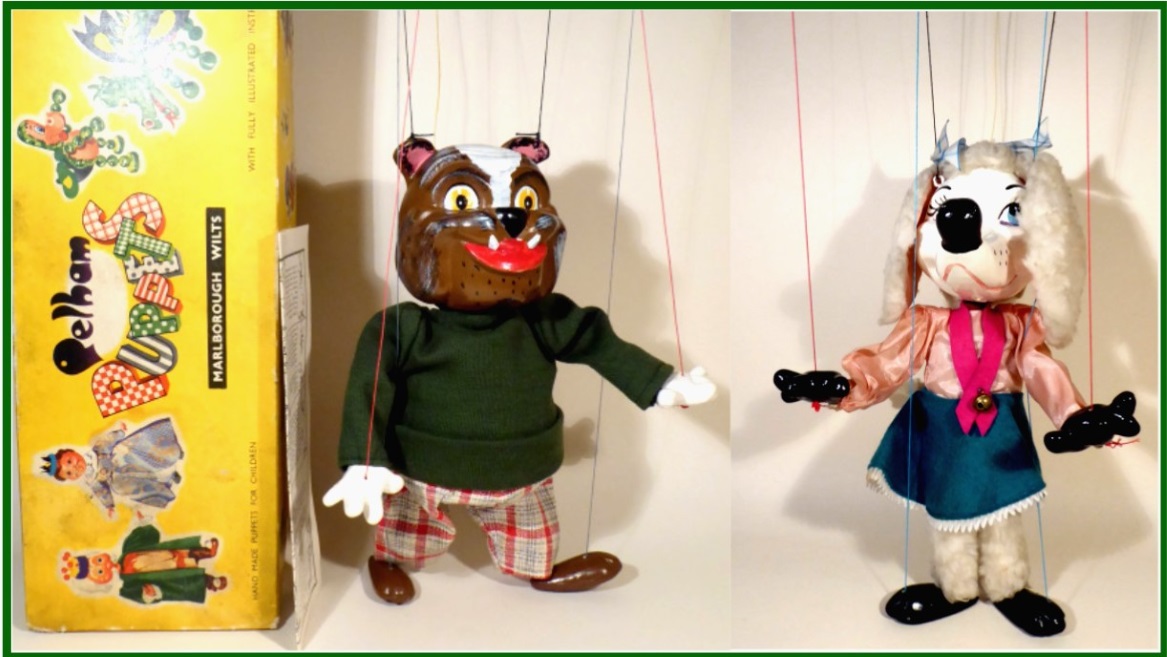 Left: The Bulldog  Right: The Poodle 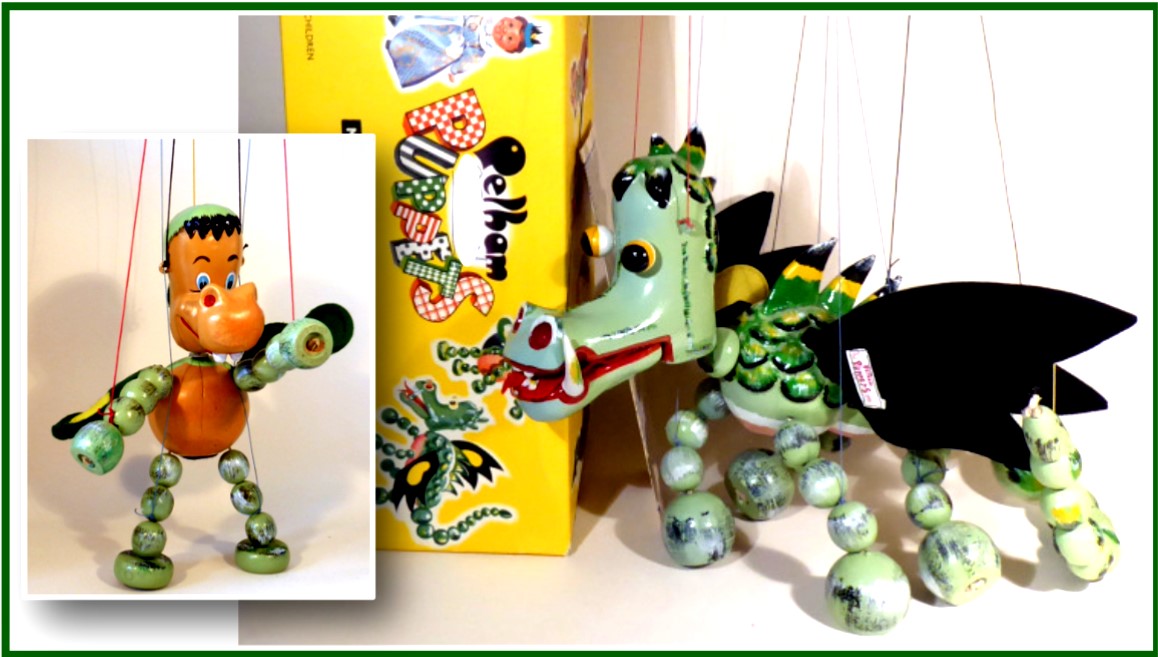 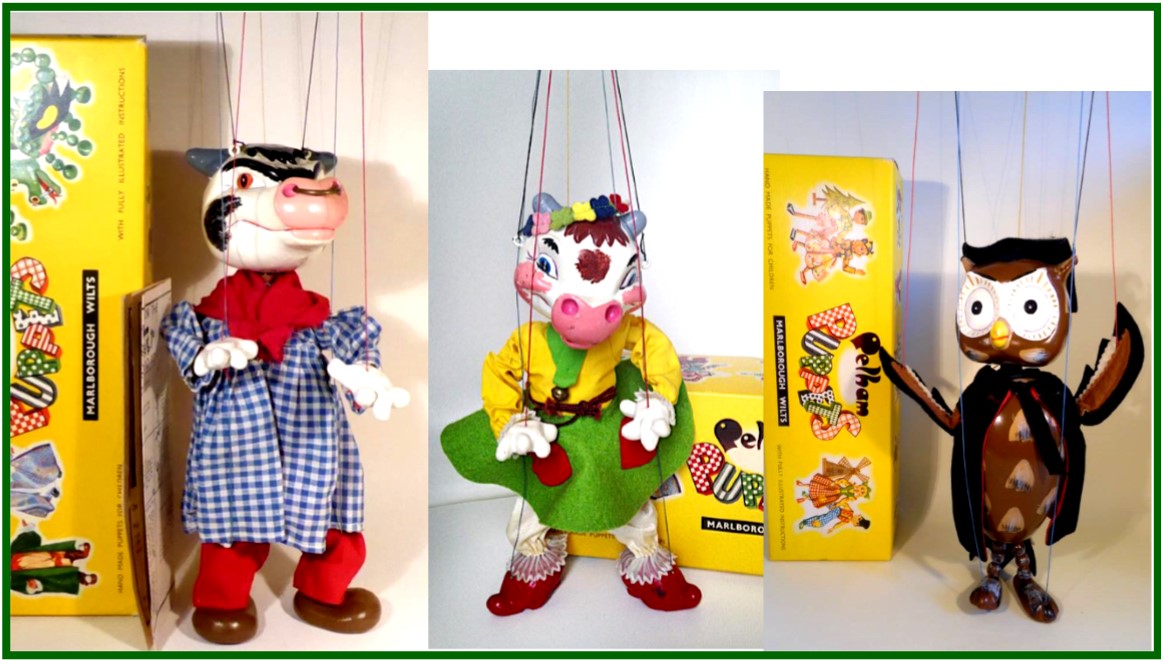 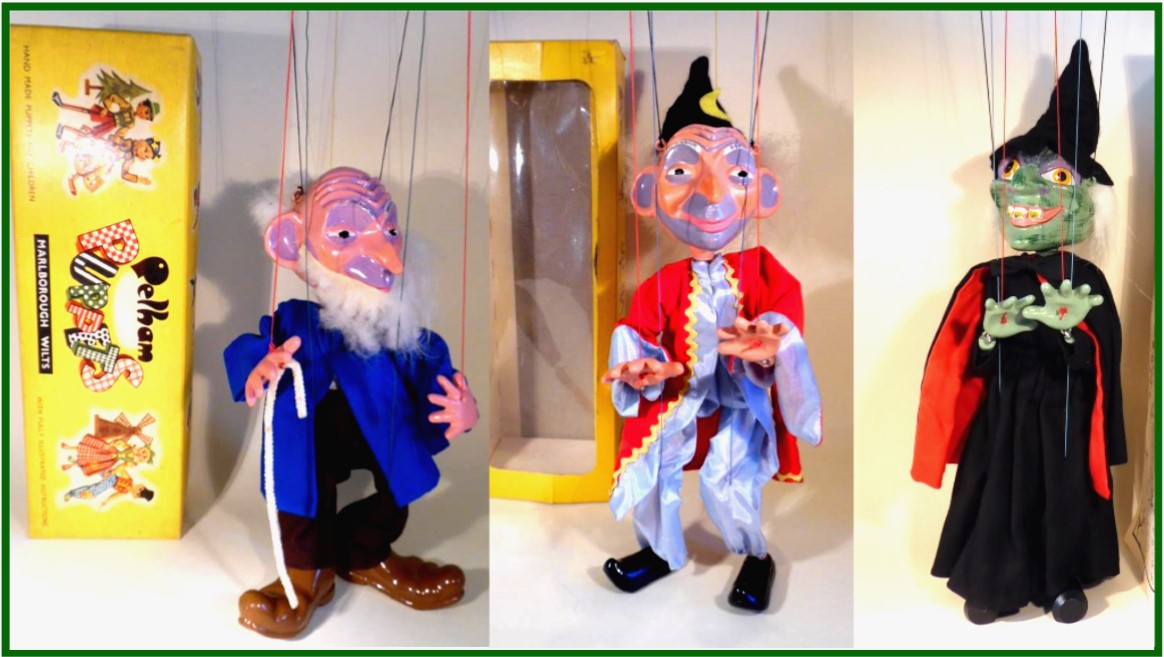 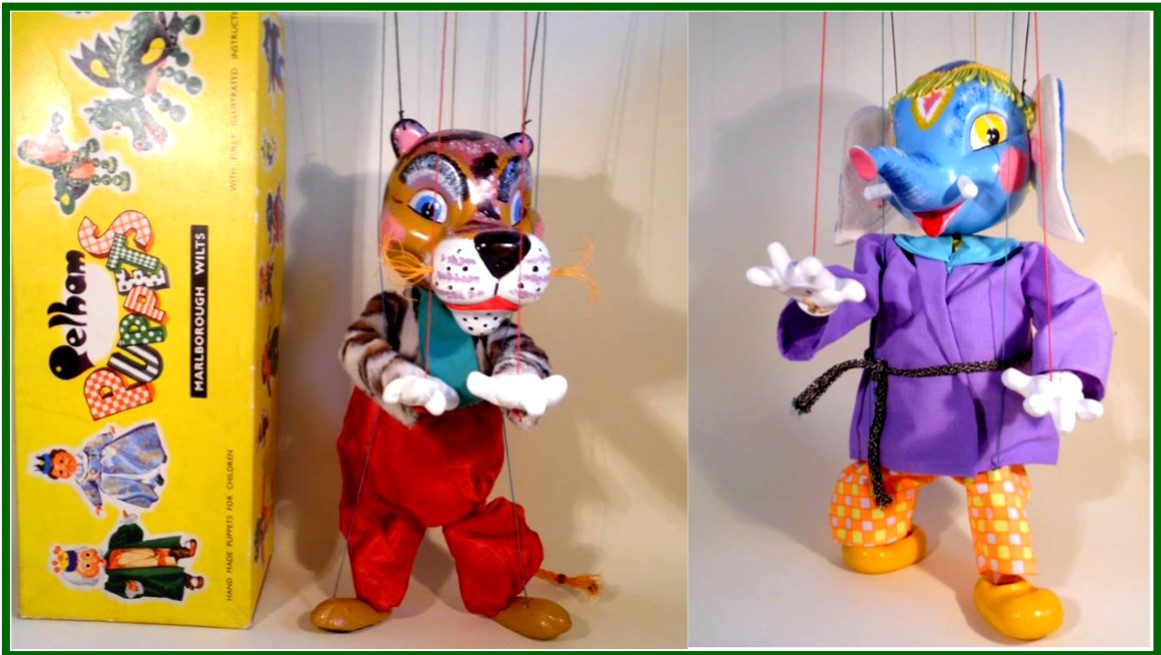 Left: The Tiger  Right: The Elephant 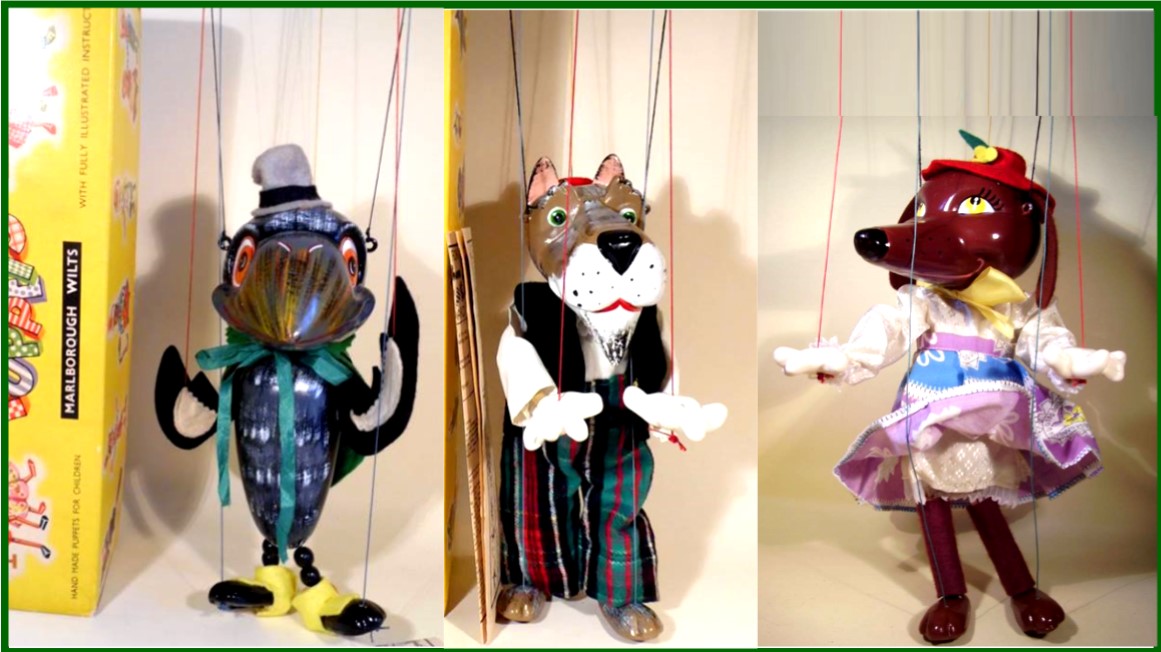 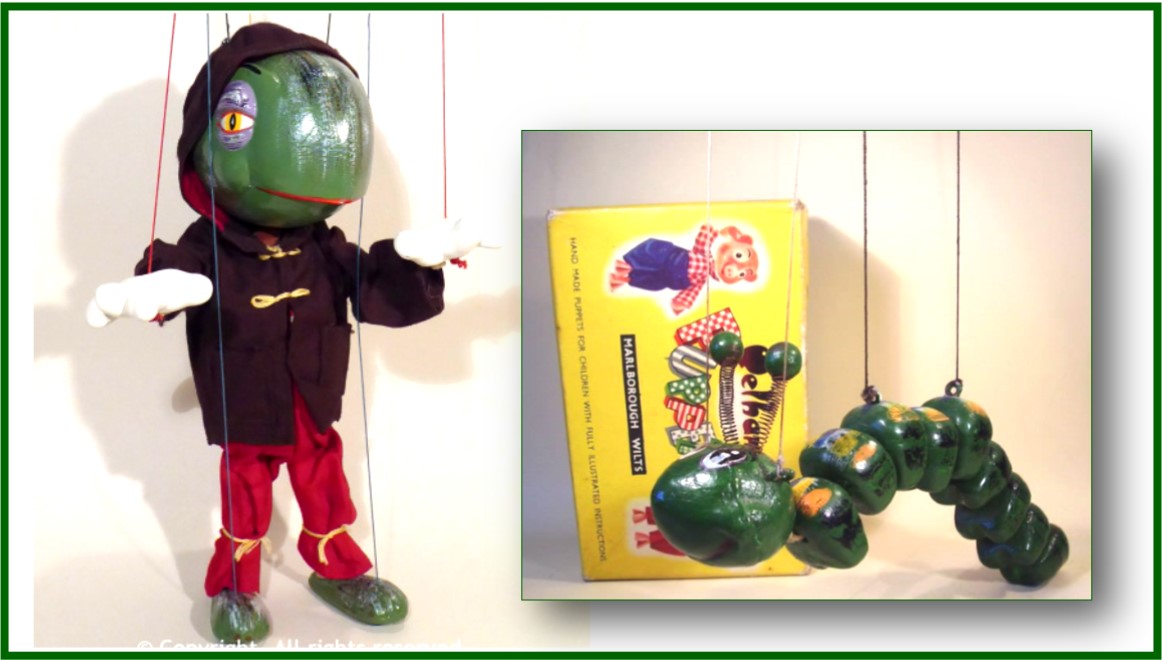 Left: The Tortoise  Right: The Caterpillar 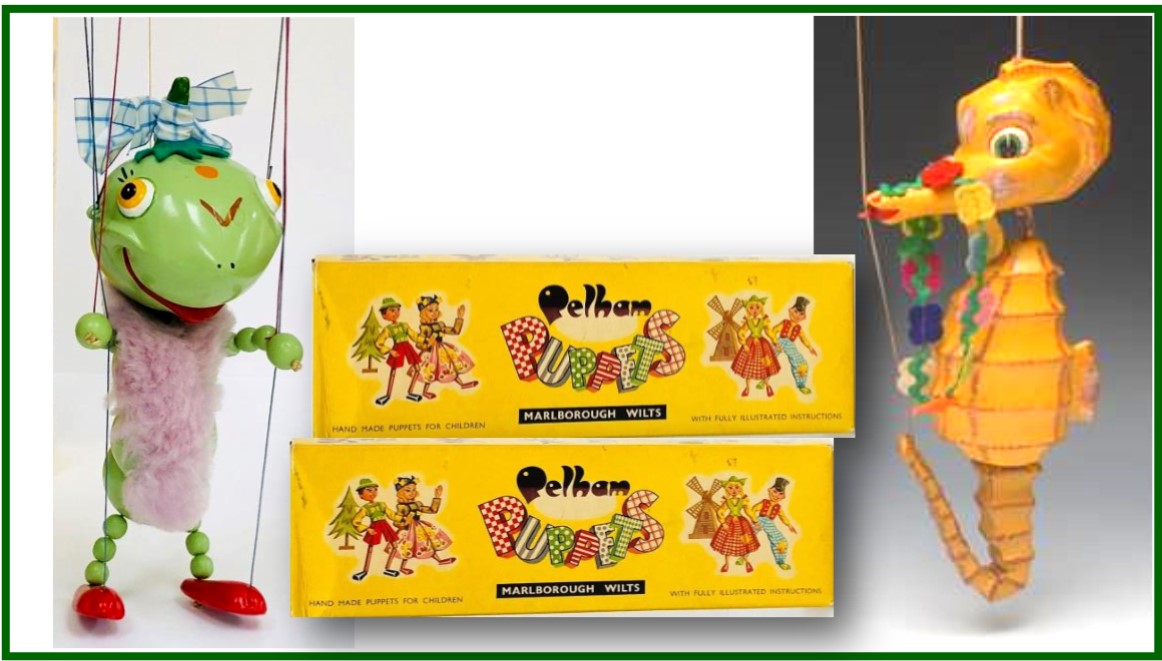 Right from the very beginning, Bob Pelham was very keen to encourage young people to get together with their puppets and form groups to put on shows. In addition to the standard range of characters that mainly represented the different nationalities, such as the Dutch Pair and Tyrolean Pair, when the moulding process became available to him, he wanted to create characters from popular storybooks and fairy tales.

The first two sets of characters were the Alice in Wonderland range and the Cinderella range of characters. They were designed mainly by Gill Leeper. He was a master wood carver and design artist. His work is very distinctive and is easily recognised by the caricatured, exaggerated and pronounced features such as the Ugly sisters and the Mad Hatter. (It was rumoured that some of his designs were caricatures of some of the people who worked within the factory!)

The Cinderella and Alice in Wonderland cast were in production from 1950 and included 11 characters from Alice In Wonderland and 5 from Cinderella. The page from a sales catalogue at the time lists all the characters produced. However, included below is a photo of Cinderella in Rags. She does not appear in the production records or the sales leaflets. She may have been a “one-off,” since Pelham offered to make single puppets to order in the 1950s – although due to the time and work involved, this service was greatly reduced in the following years. Characters from these sets are now very sought after by collectors since they are considered ‘rare’ compared to the puppets that were produced in their thousands. 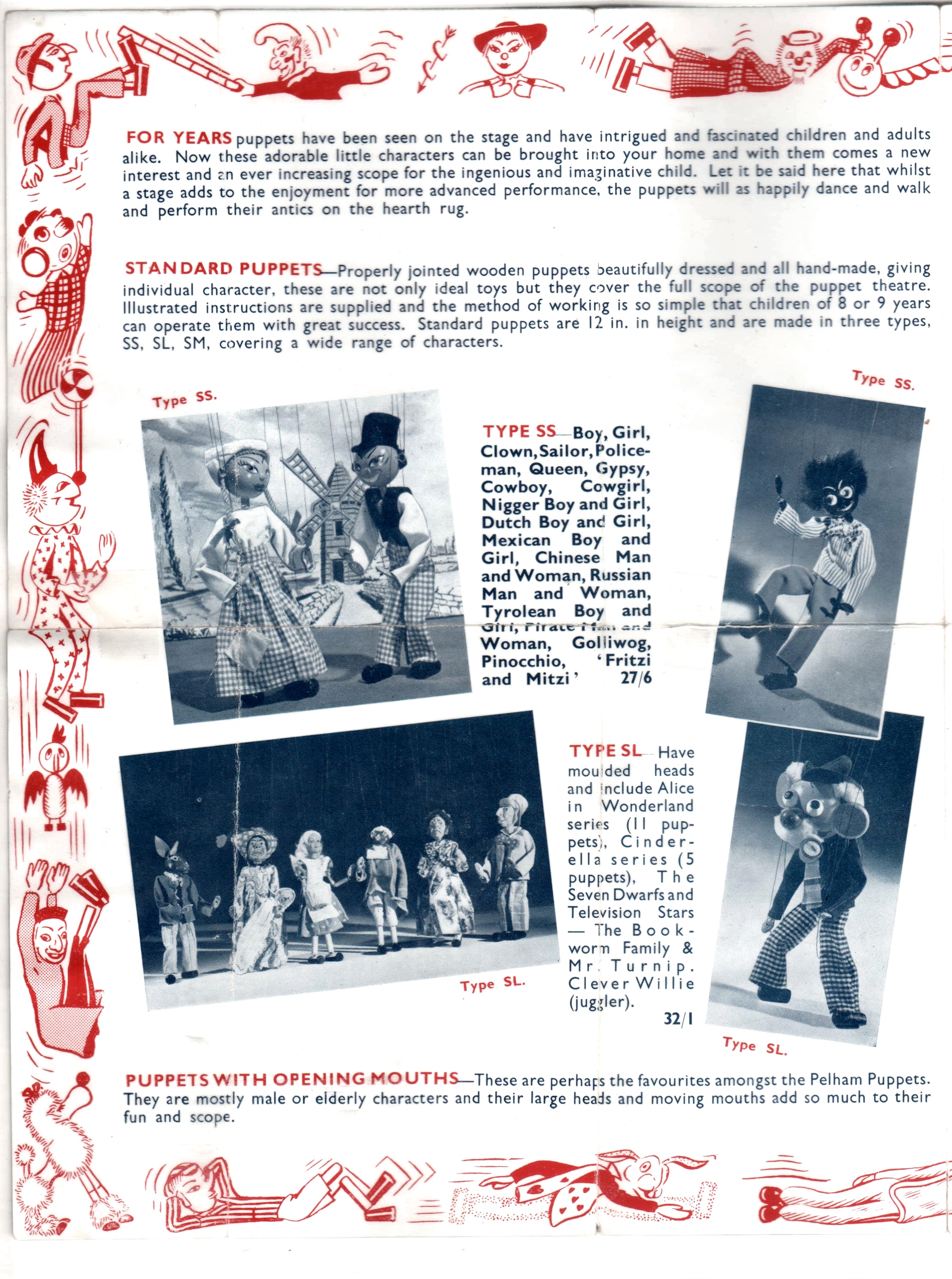 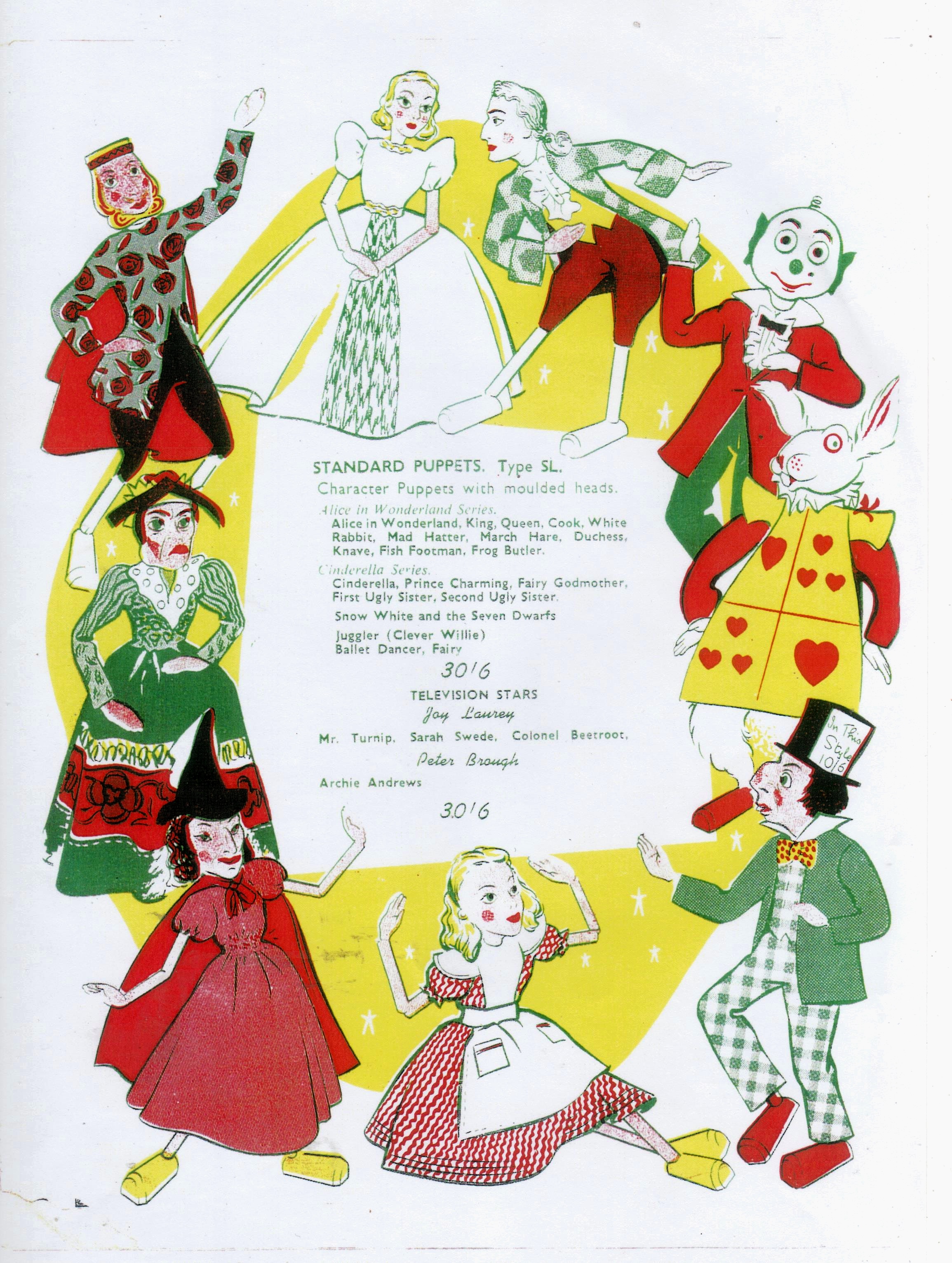 The characters as listed on the sales leaflets above and in the Company production records are pictured below. 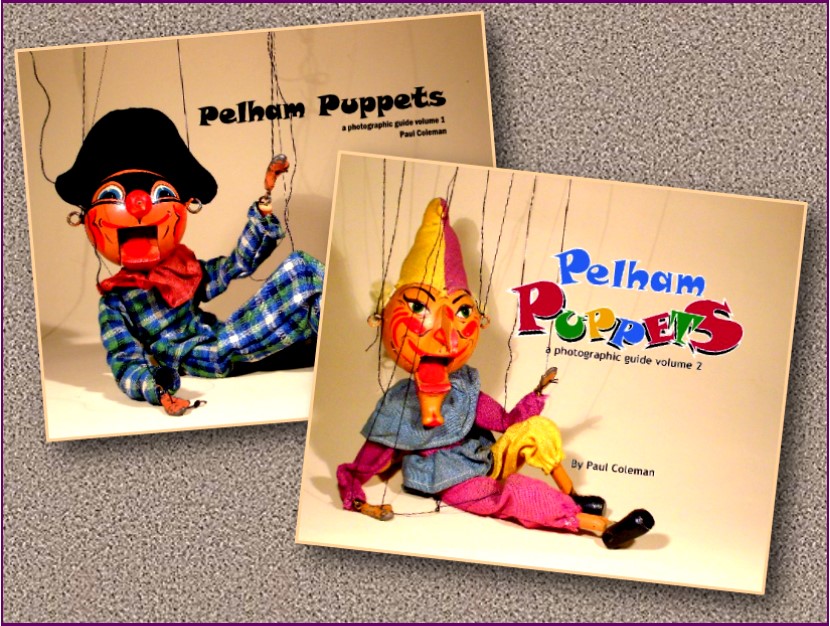 Photographs by Paul Coleman.  They are listed here for information purposes only. If you wish to copy them, please ask permission before doing so, thank you.

Paul has produced two beautiful ‘coffee-table’ books, especially with Collectors in mind, featuring hundreds of Pelham Puppets and covering the entire period of production from 1947 through to the 1980s – and beyond. You can obtain the books online, Volume 1 here and Volume 2 here. 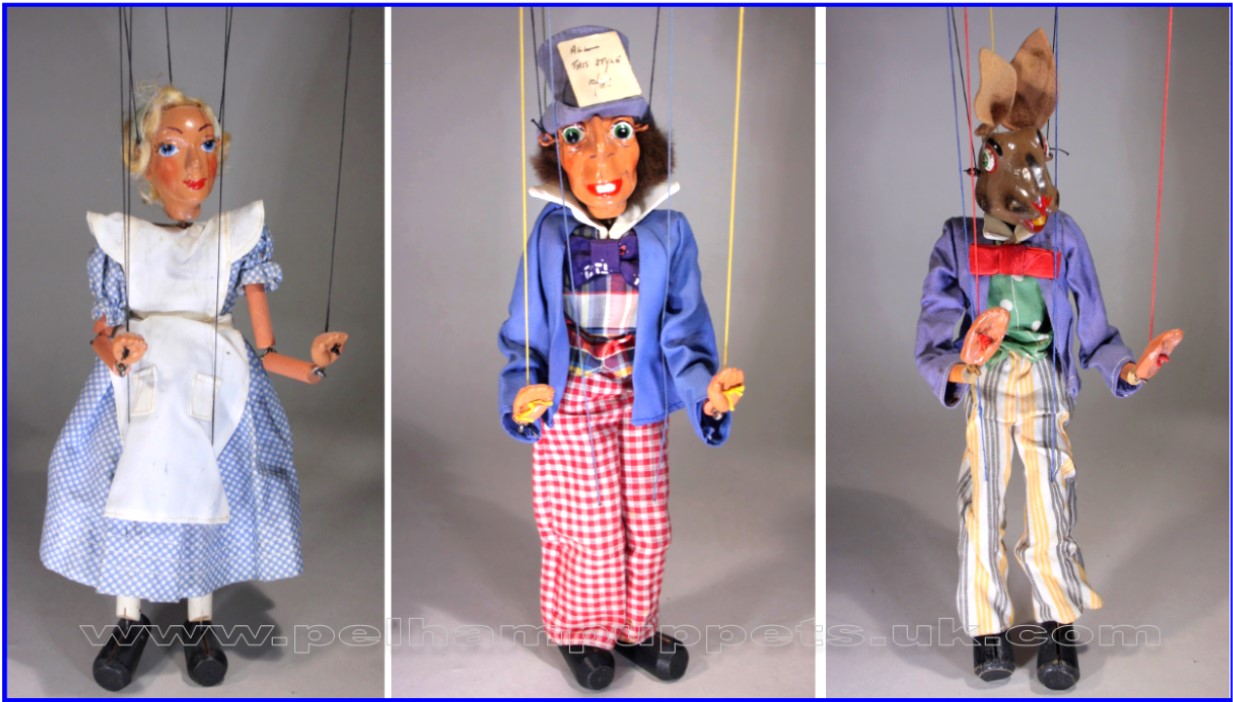 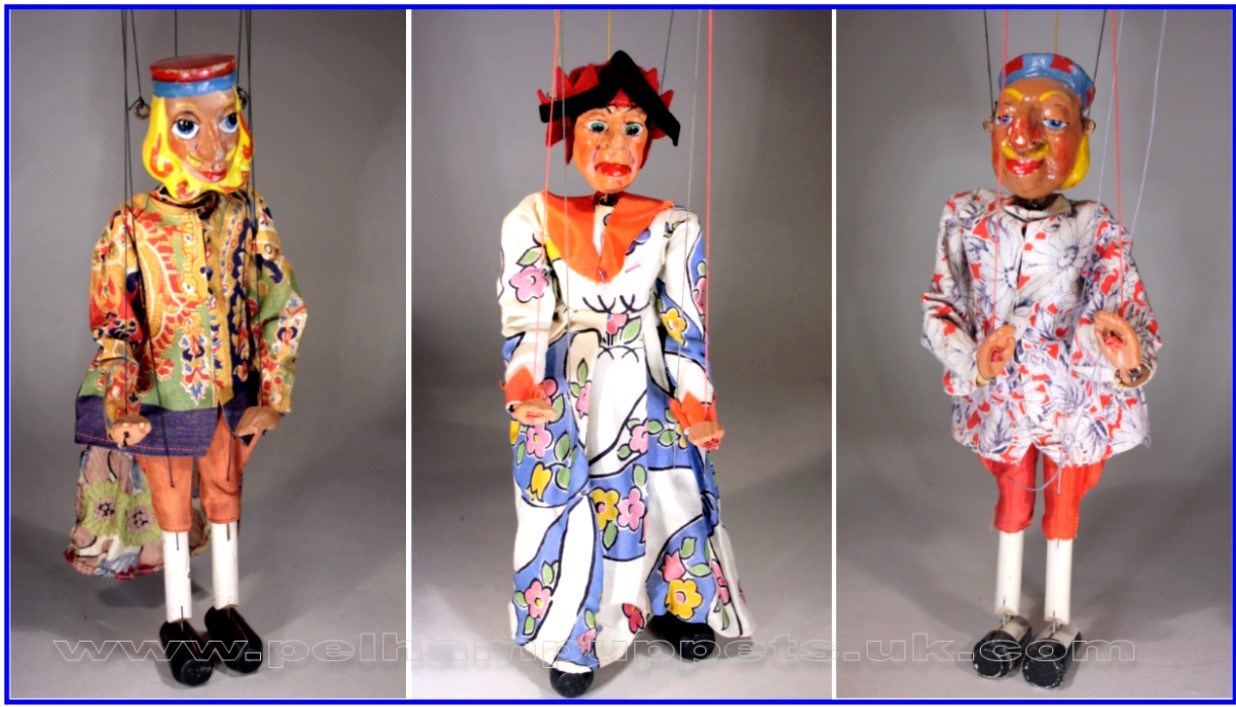 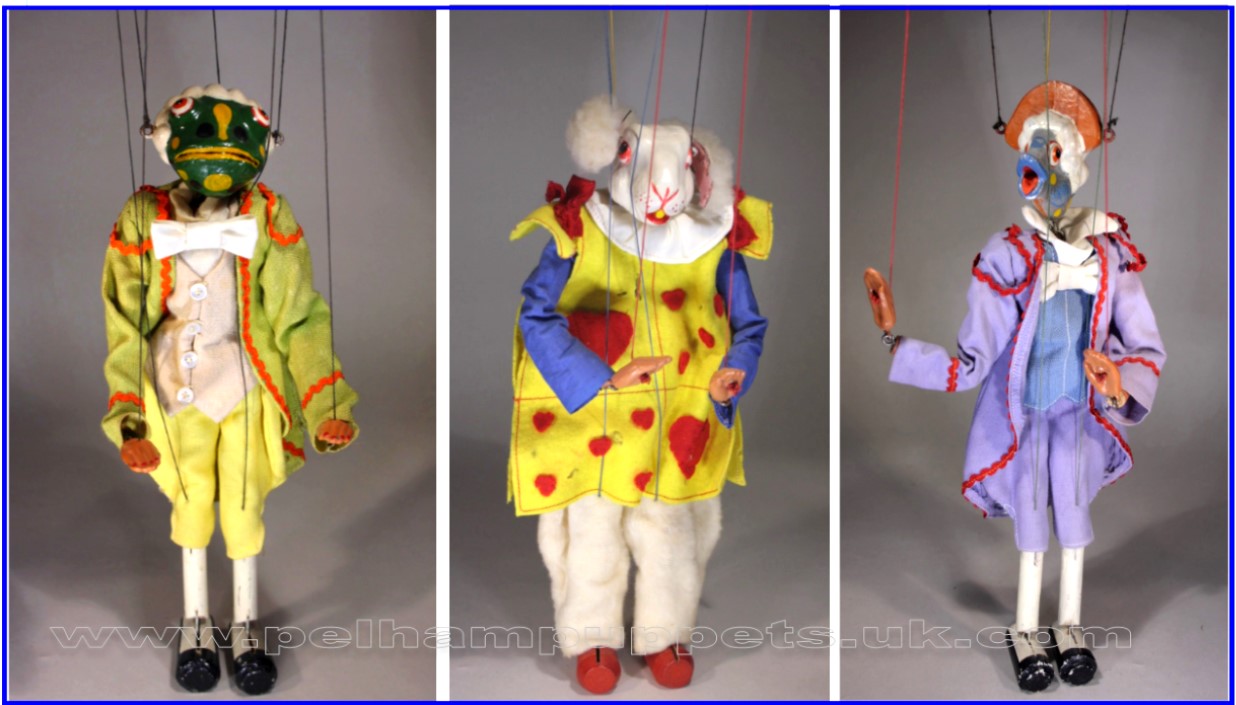 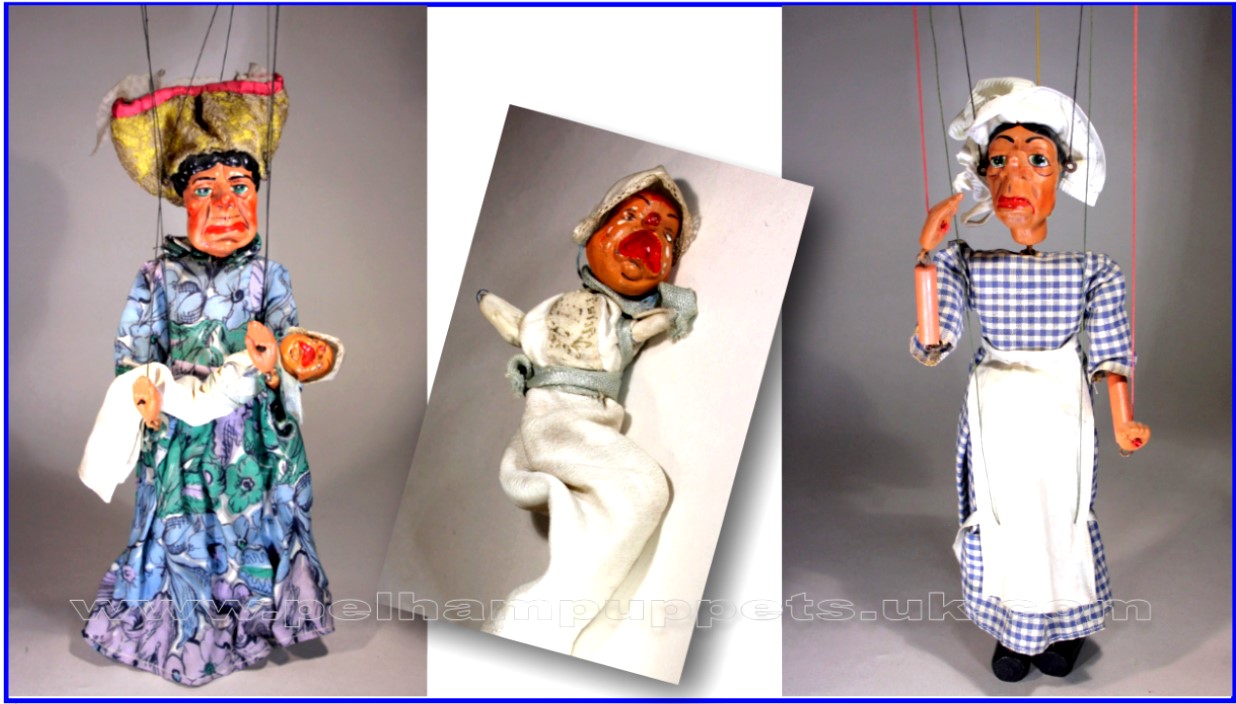 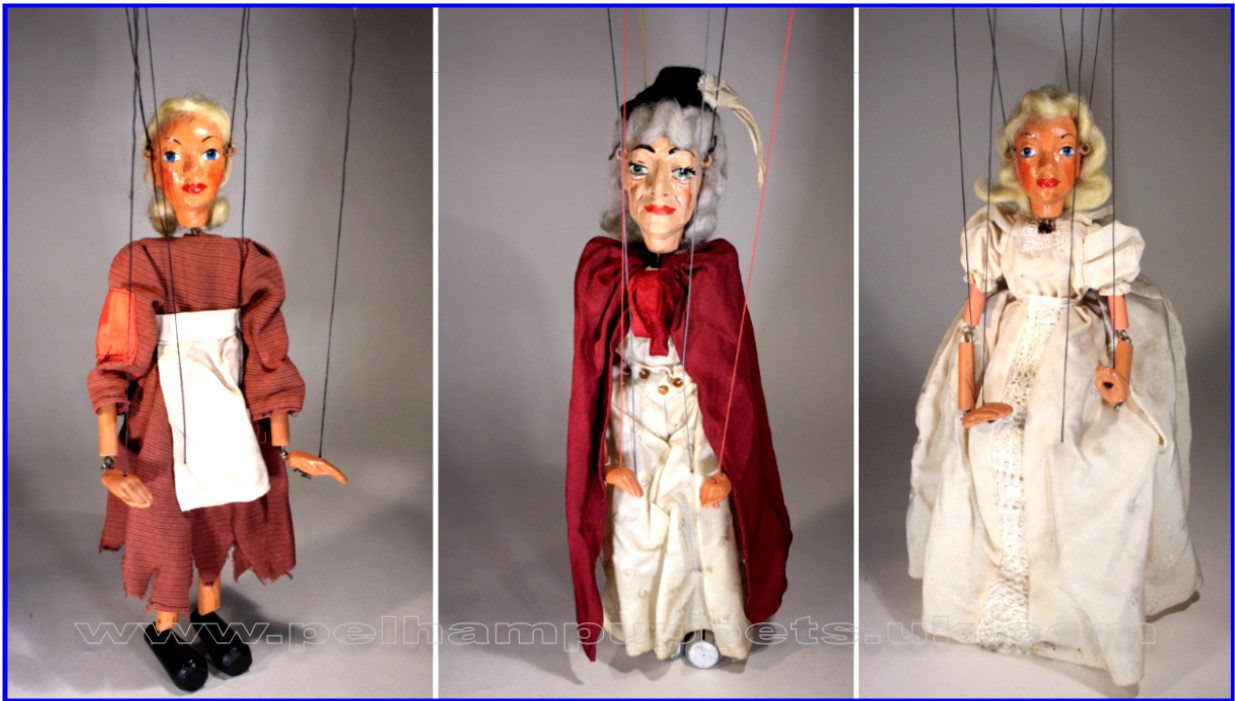 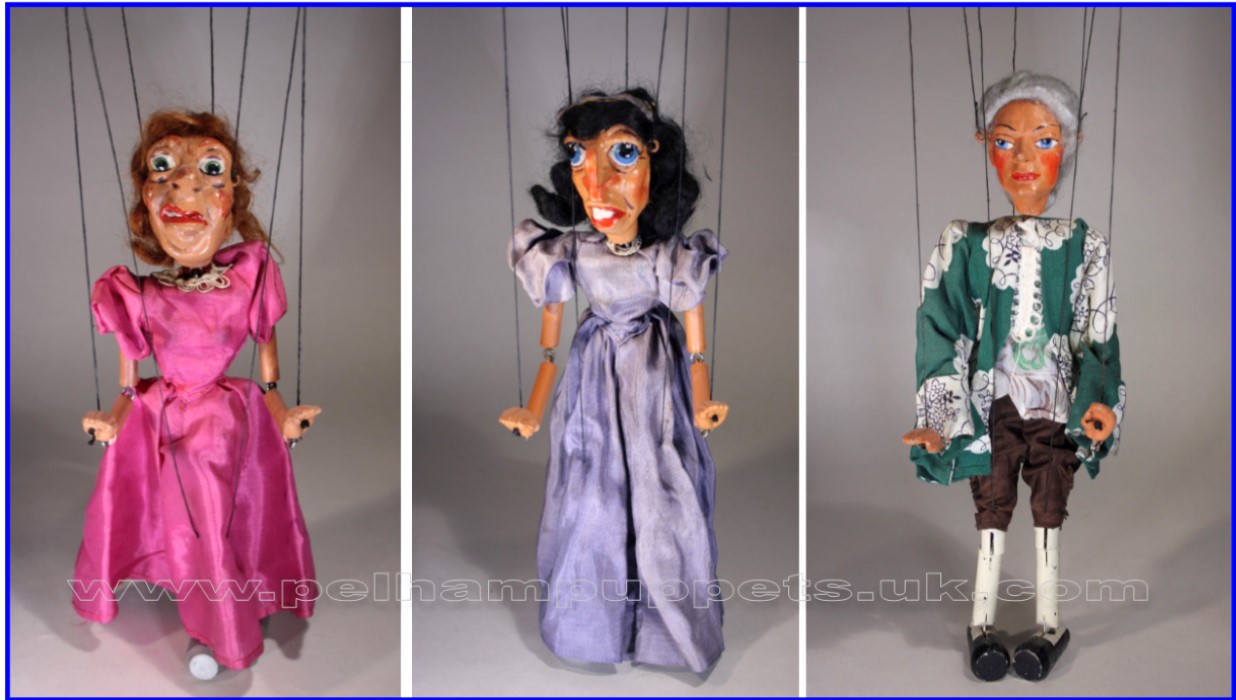 To return to top of the page, click here.