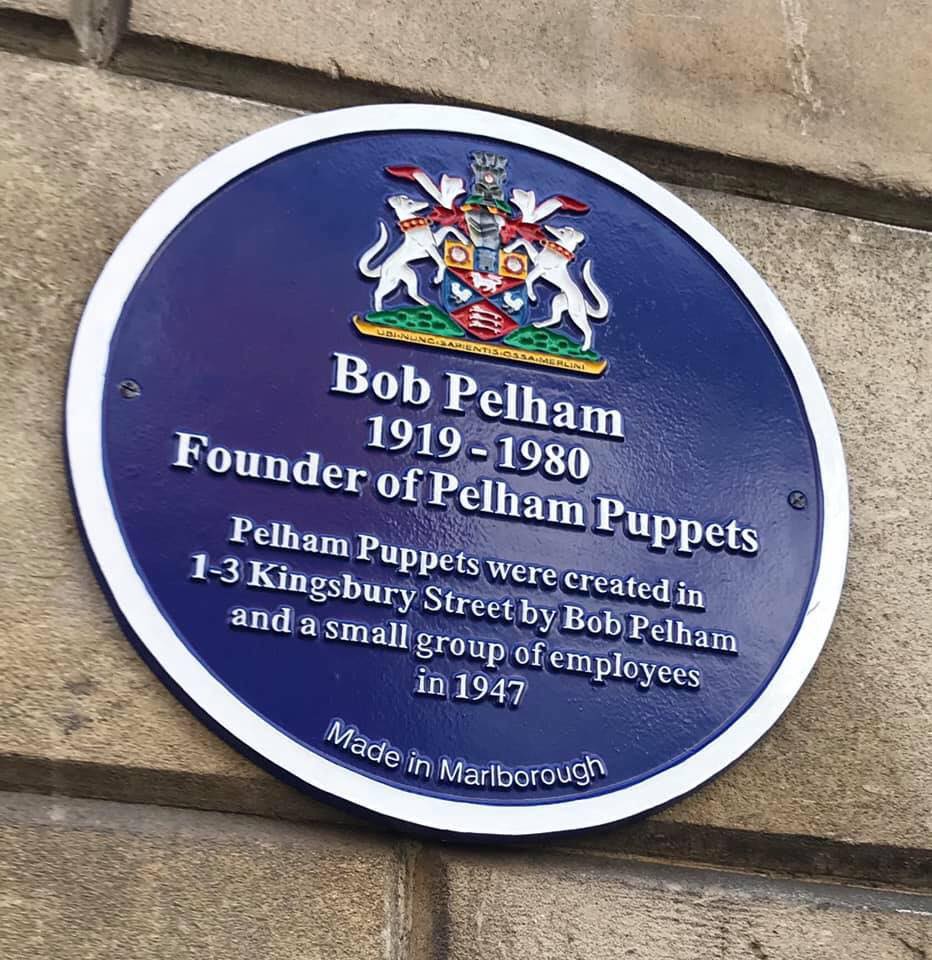 Marlborough Town Mayor, Cllr. Lisa Farrell along with Astrid and Sue Pelham, Bob Pelham’s nieces, unveiled a Blue Plaque in Kingsbury Street, across from the Town Hall in Marlborough, Wiltshire to mark the place where Pelham Puppets were first produced. The date coincided with a very special day, as it would have been Bob’s 100th birthday.

The Town Mayor, Councillor Farrell said, “This blue plaque is a fitting tribute to Bob Pelham who played a hugely important part in Marlborough’s history.

Many of Marlborough’s residents will remember the importance of Pelham Puppets to the town and may well have worked in Kingsbury Street or at the factory based in London Road. Others will have grown up playing with the internationally famous puppets and will have their own personal favourites. Today is our chance to say thank you.”

Following the unveiling there was a Reception attended by former employees of Pelham Puppets, including Grenville Hodge, (who was Works Manager from 1977 to 1986,) together with people and some performers who were involved with the Bob Pelham World of Puppets Festival in 2017.

Guest speakers included Sue Pelham, Ann Perrin ( aka: Ann Field,) Ronnie Le Drew, and a performance by Ventriloquist, Max Fulham. David Leech presented a short marionette show and he had an exhibition of Pelham Puppets including a lovely display of Wonky Puppets from 1947 by Huw Davies.

You can view a short video of the day’s event, by Brian Hibbitt here.

It was in May 2006 that I and Rosemarie Gibaud, one of Bob’s first employees in 1946/7, approached Marlborough Town Council with the proposal for a Blue Plaque to mark the location where Bob Pelham began his Company. At that time, circumstances were not favourable for several reasons and the request was denied.

However, 10 years later things had moved on and attitudes changed, following my proposal to stage a Puppet Festival to mark 70 years of Pelham Puppets in 2017.

At the Marlborough Town Council Meeting on 7th November 2016, Councillors considered my request, presented to them by the Town Clerk, Shelley Parker, for the hire of the Town Hall and Priory Gardens and support for a Pelham Puppets Festival in 2017. The request was also made for a blue plaque to mark the importance of Pelham Puppets to Marlborough. 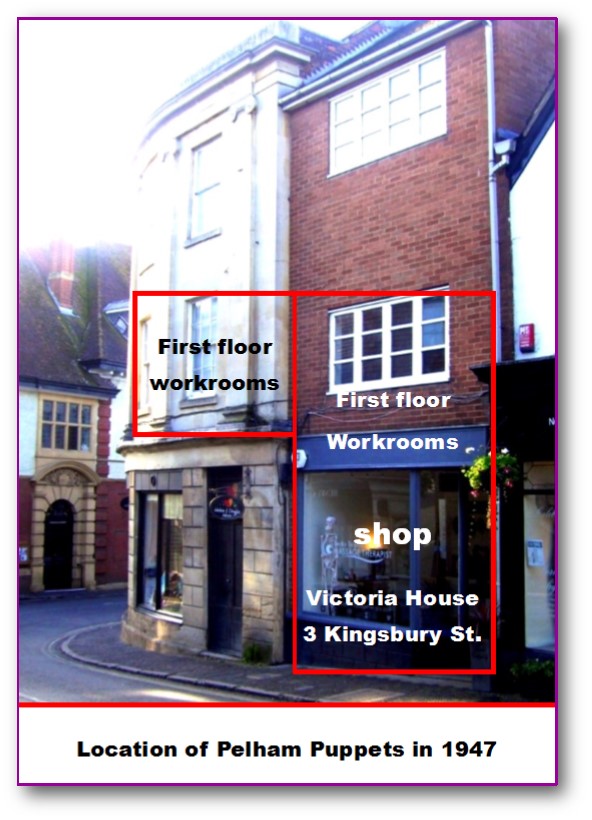 The full Council welcomed the proposal for the Marlborough Puppet Festival and offered to contribute by offering the use of Priory Gardens and the Town Hall, free of charge. They also agreed to help toward funding the festival financially and with planning arrangements. It was also agreed that plans for a Blue Plaque in recognition of Bob Pelham and Pelham Puppets would be put in place some time after the festival.

The support and work from Marlborough Town Council and the time and work given by the Town Clerk, Shelley Parker and Assistant Town Clerk, Clare Harris especially, has been wonderful. I suggested three anniversary dates that might be suitable: 16th October 2018, which would mark the 70th anniversary of when Bob changed the trading name from Wonky Toys to Pelham Puppets; 3rd December 2018, the (71st) anniversary of Bob opening his retail outlet in No 3 Kingsbury Street or 28th February 2019 which would mark Bob’s 100th birthdate.

Preparations and arrangements began to be made by the Town Clerk and the Assistant Town Clerk, from February 2018 and eventually, it was agreed that the plaque should be put in place on what would have been Bob Pelham’s 100th birthday, 28 February 2019. 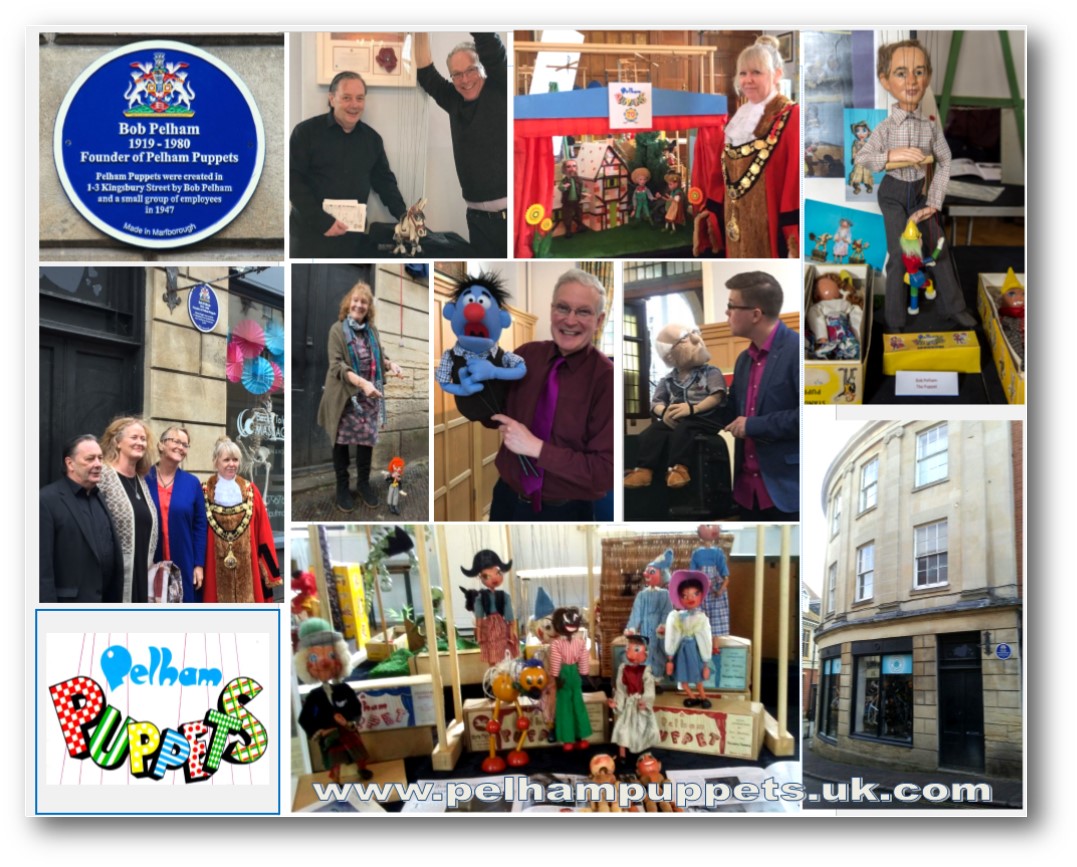 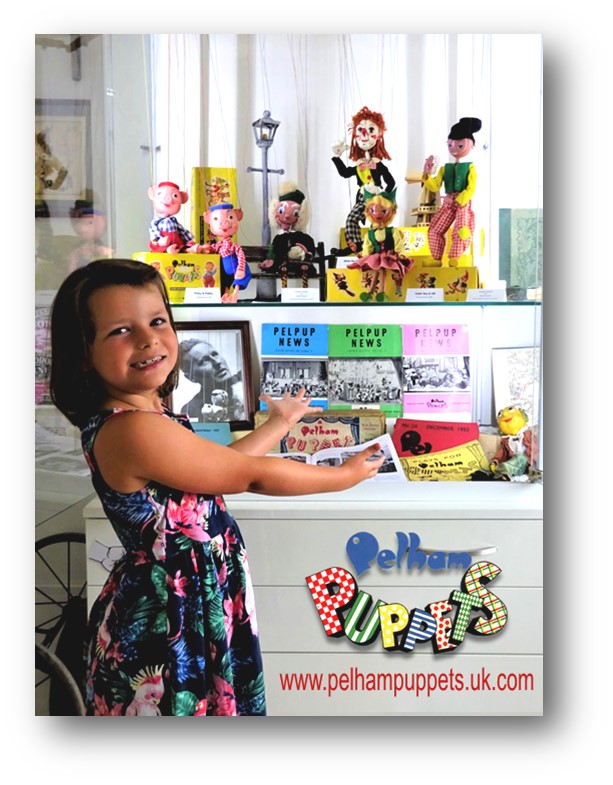 Pelham Puppets in Marlborough Museum
Pelham Puppets finally have their own dedicated space in Marlborough Museum, within the Merchant’s House on the High Street, for visitors to see and enjoy.
I installed the first, small display, on 12th August 2021, (with the help of “puppet expert,” Maggie – my granddaughter,) featuring half a dozen of the most popular puppets as well as some Pelpup News magazines and other information about the Pelham Puppet Company.
This small display is the ‘introduction’ of the Pelham Puppet Museum project and plans for a larger, permanent space to display many more puppets and items related to the History & Development of the Company are being prepared for 2022 and beyond. Further information will be added about this later in the year as the project develops. “Watch this space!”