Note: The page “How It All began” can be found by following this link HERE. 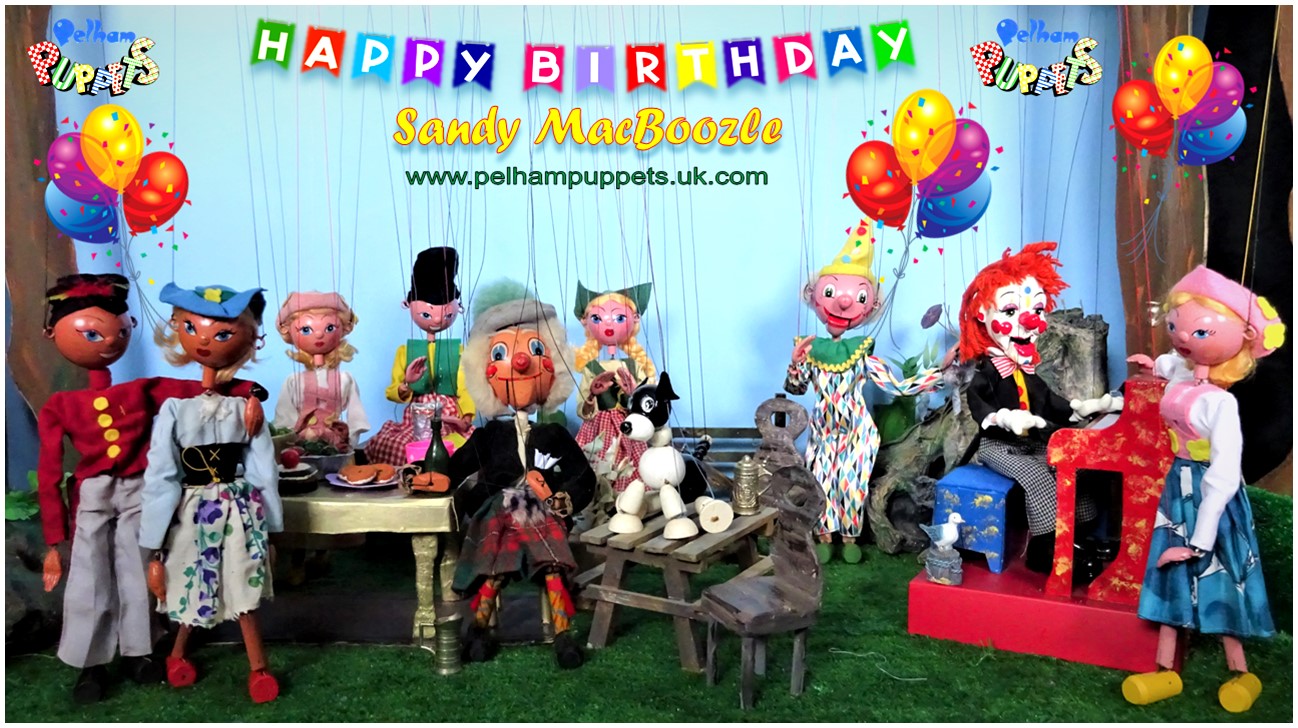 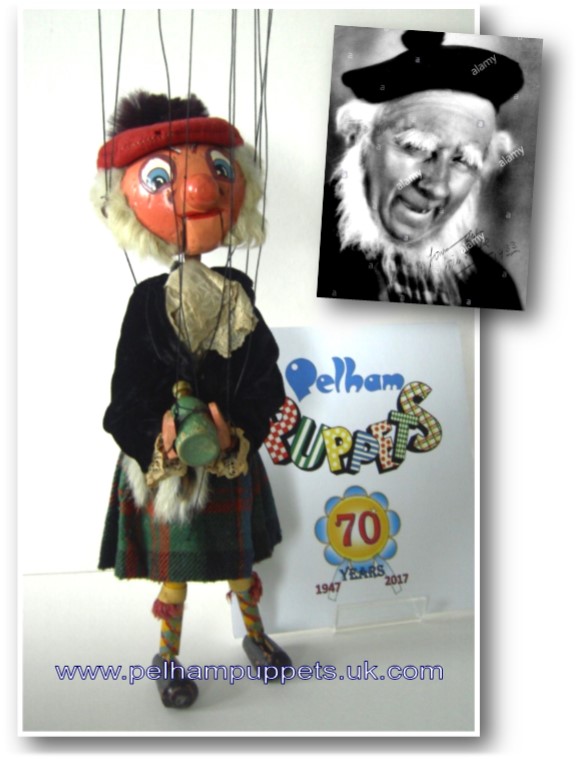 Photo: The original MacBoozle made by Bob in June 1947. Inset: Will Fyffe.

The idea for Sandy MacBoozle developed over time after Bob saw a Scottish actor and entertainer, Will Fyffe on stage, entertaining the troops in North Africa during the War.

Will Fyffe was a well known, talented actor during the  1930s and 40s. He was also a successful music hall artist (singer-songwriter and comedian), creating a succession of comic characters, including “Uncle Mac” and ‘Daft Sandy,’  the village idiot and he had the ability to create a character and then seem to actually be that character. Will Fyffe wrote and recorded the song “I Belong to Glasgow” and he became a worldwide star. Fyffe found the inspiration for the song from a drunk he met at Glasgow Central Station. The drunk was “genial and demonstrative” and Fyffe asked him: “Do you belong to Glasgow?” and the man replied: “At the moment, at the moment, Glasgow belongs to me.” Bob would often include Macboozle singing ‘I Belong to Glasgow’ in the factory Christmas party shows.

“I belong to Glasgow,
Dear old Glasgow town;
But there’s something the matter wi’ Glasgow,
For it’s goin’ roun’ and roun’!
I’m only a common old working lad,
As anyone can see,
But when I get a couple o’ drinks on a Saturday,
Glasgow belongs to me!” 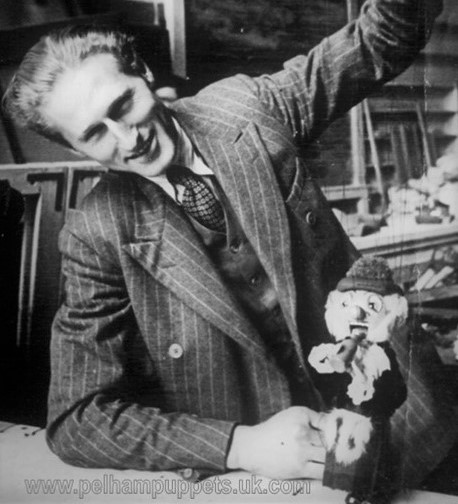 MacBoozle, being a somewhat inebriated looking Scotsman, with a round red face and a whisky bottle in his hand, seemed to epitomise the public’s impression of the tipsy Scot, (perhaps not considered ‘politically correct’ these days,) but he certainly captured the imagination of the public in the late 1940s and into the early 1950s and he proved to be a very popular character and became one of the best selling puppets in the life of the Company.

In the late 1940s and in the 1950s, MacBoozle often appeared on television with his creator and he was filmed at the British Industries Fair as well as being featured in a number of national newspapers, including the Daily Mirror on 30th December 1947. Photo: Bob Pelham with MacBoozle in December 1947 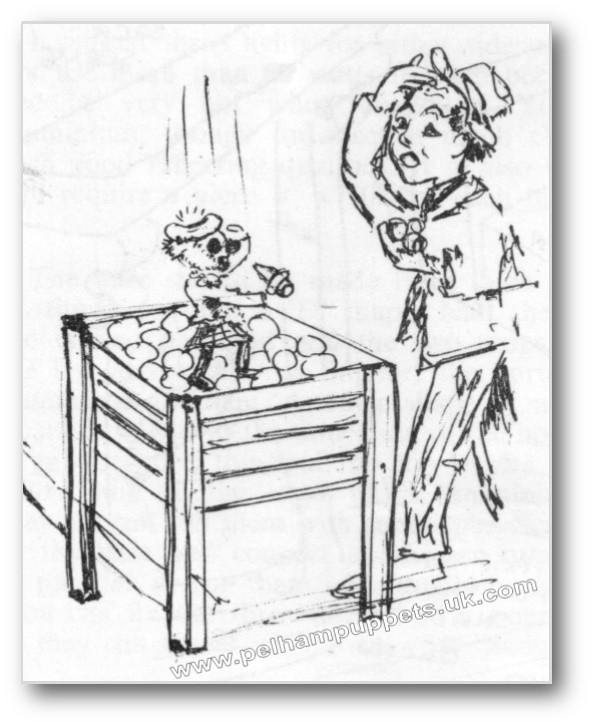 It was in October 1947 that MacBoozle played an important part in the development of the manufacture of the puppets. It was an event that proved to be a turning point in the history of Pelham Puppets. During the first year or two Bob had difficulty making puppet heads. He explained, “At first, we turned them on a lathe, but they all came out in different shapes from ovals to squarish rounds. Well, I suppose it did mean their heads were all different shapes but as we wanted them in large quantities an alternative supply had to be found. So, imagine my delight when one day during the Mop Fair in Marlborough High Street I came across a large box of the roundest wooden balls I had ever seen. “Four balls for sixpence!” the man said, thrusting them into my hands.” That man was Mr Johnny Bunce. 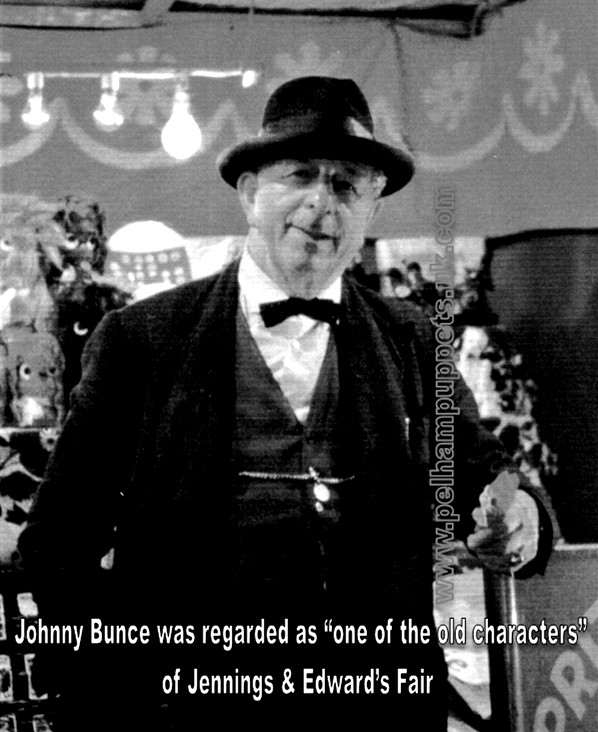 Johnny Bunce was regarded as “one of the old characters” of Jennings & Edward’s Fair that first appeared in Marlborough in 1947. He had the coconut shy that was situated “about where the old cinema used to be.”  He was a well-built gentleman and always wore an old hopper hat and a waistcoat with a watch & chain and was also known as a man who “did a bit of buying and selling and good at bartering and all sorts of things – he always had something in his pockets to make a bob or two.” Bob went on to tell him, “’These are just what I want! Where did you get them from?’ – But he wouldn’t tell me – I suppose he thought I was going to set up another coconut-shy stall. So, I went off and fetched MacBoozle and got him to leap up onto the box of balls by the stall, made him tap his head and say, “This is what he wants these balls for!”  At that, Mr. Bunce became very friendly and he readily gave the name of some woodturners, Hoopers of Stroud. 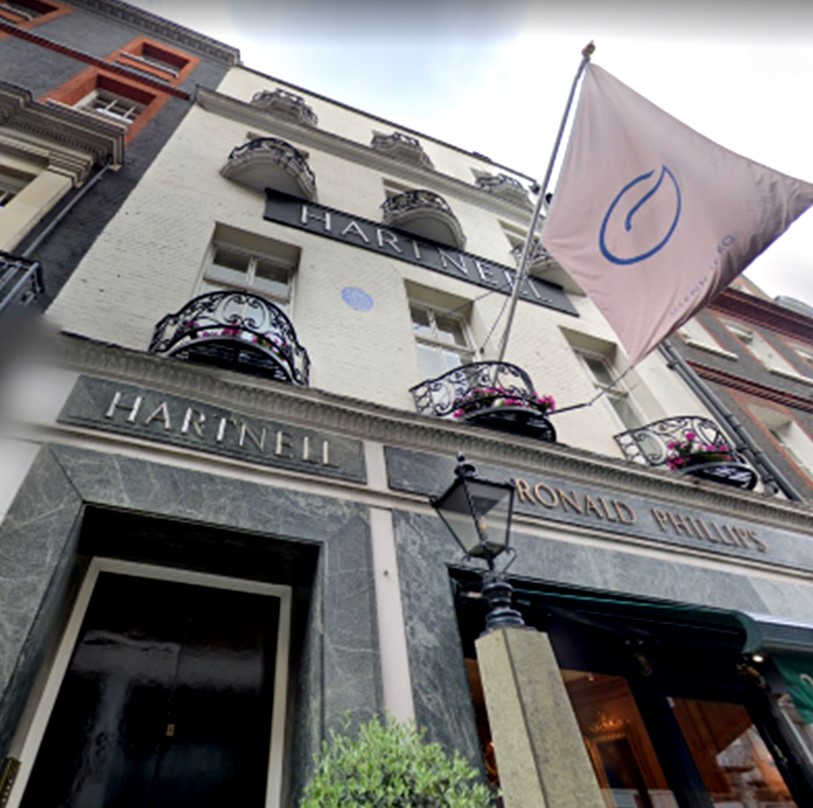 Bob took MacBoozle everywhere. On one occasion, just before the Royal Wedding in November 1947, of Princess Elizabeth to Prince Phillip, (now the Queen and Duke of Edinburgh,) Bob called on the elegant establishment of Mr. Norman Hartnell, dressmakers to the Royal Family, and took  “Macbee” along, to dance on the desk and to ask if they could spare bits and pieces from their workrooms. They were so entranced with MacBoozle’s antics, they happily gave him a pile of unwanted pattern books. Soon, the pieces of rich satins, crepes and silks were turned into puppet costumes of glittering splendour. No doubt the young owners to be would have been surprised to learn that some of their puppets were dressed in Hartnell fabrics.

MacBoozle remained in production for the entire life of the factory. He was one of the more complicated puppets with a total of 12 strings. A standard puppet only had seven strings.

But he could take a swig from his bottle, take his hanky from his pocket and mop his brow as well as do an Highland Fling!

He was often included in the Animated Display units, often sitting at a table with Mrs O’blige (SM Old Lady) or strewn across a park bench with “PC 49” – the Policeman, standing over him and  taking notes in his notebook. Mind you, Bob always maintained that all the Scots he knew were as sober as judges!

In 1977, one lady visiting the Stand at a trade fair expressed some concern  that a child’s toy was holding a bottle of whisky. However, Bob explained that he had had the same bottle now for over 30 years and in fact he hadn’t drank a drop in all that time – it was all an act.