This page was created to mark the first anniversary of the unveiling of the Blue Plaque, on 28th February 2019, marking the location where Bob Pelham started making Pelham Puppets in 1947. You can read about the “Blue Plaque Day” here. 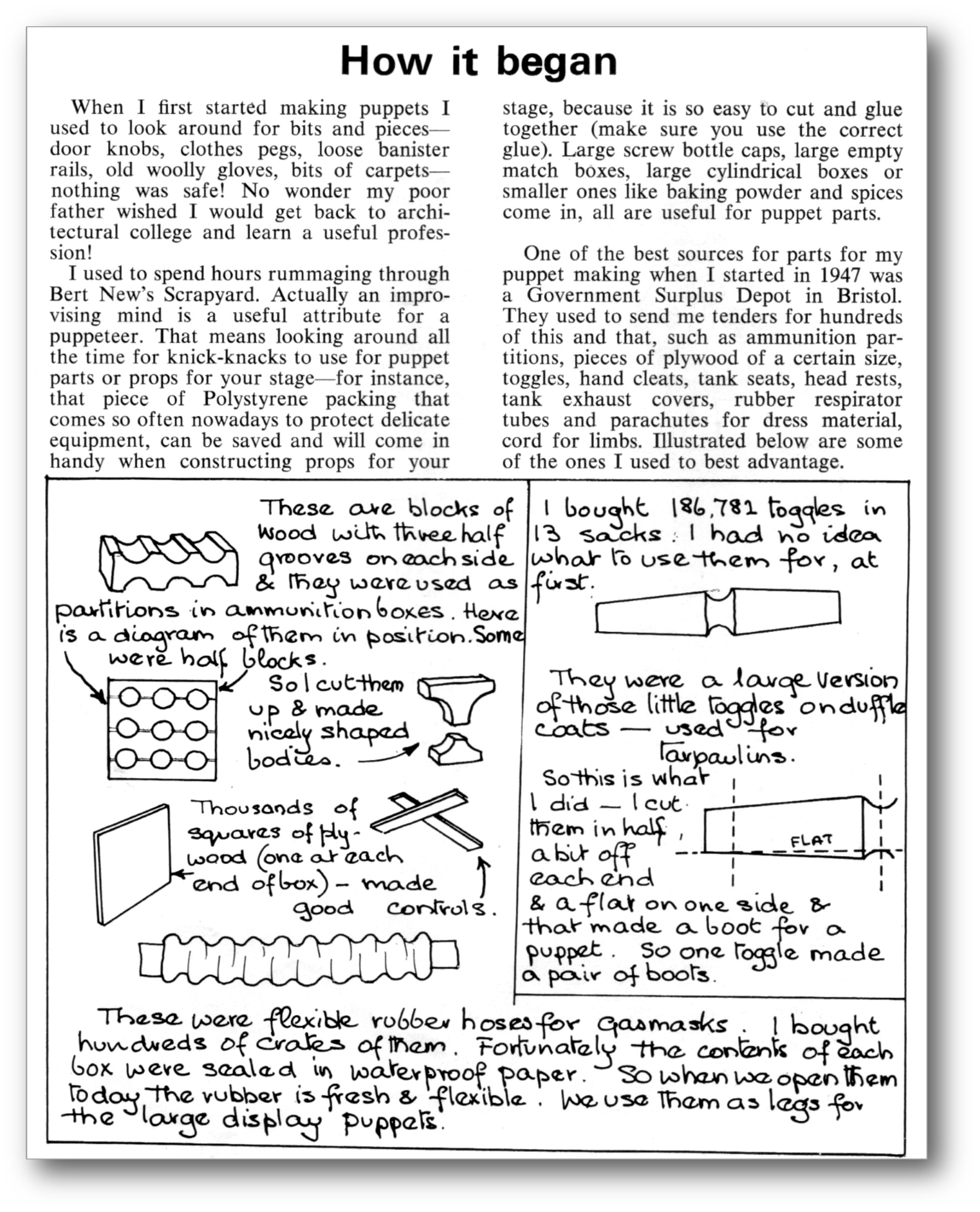 When Bob Pelham began making puppets in 1947 he said, “ I used to look around for bits and pieces, door knobs, clothes pegs, loose banister rails….  Nothing was safe! No wonder my poor father wished I would get back to architectural college and learn a useful profession!

I used to spend hours rummaging through scrapyards…. One of the best sources for my puppet making was a Government Surplus depot…. They used to send me tenders for hundreds of this and that, such as ammunition pieces…. toggles, rubber respirator tubes and parachutes.”

He illustrated in Pelpup News No 28 in 1974 some of the items he used to best advantage.

One of his first employees was Rosemarie Gibuad, (pictured below,) who along with Laura Ray, Frank Clements and Sid Hiscock worked during the first year making the Wonky Donkeys, but they soon had to abandon production of these figures and they moved over to creating the puppets. As Rosemarie recalls, “We  made a few wooden toys  as a side-line until …. we moved into Victoria House, an old rambling Building over the Labour exchange at the foot of Kingsbury Hill in Marlborough.” 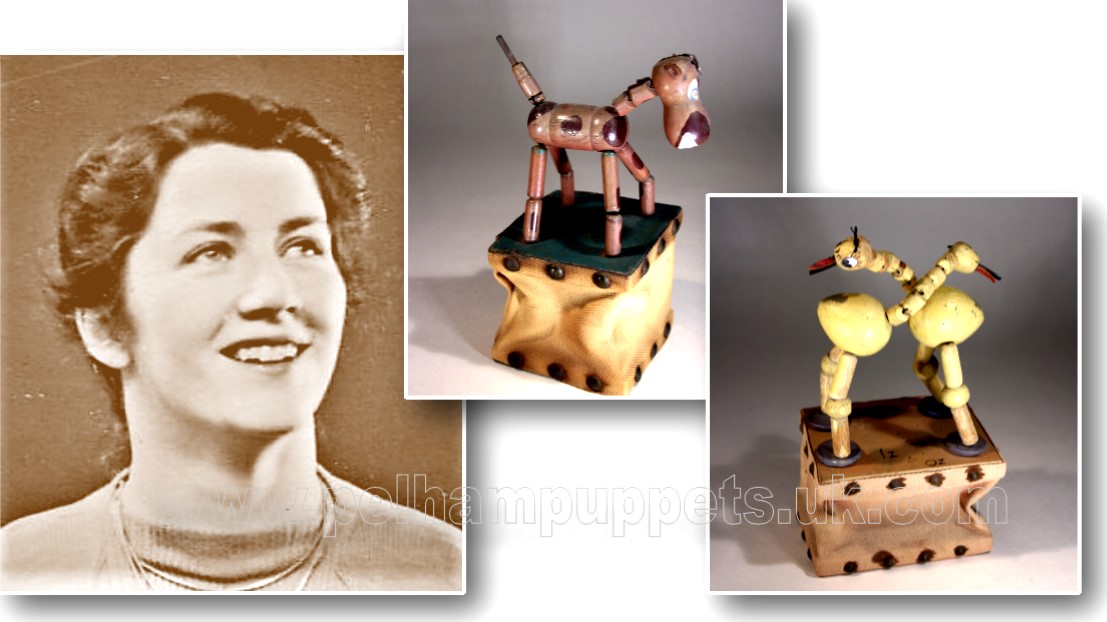 The building was known locally as Victoria House and Irvine’s, a grocer’s shop  occupied the ground floor prior to the war, as can be seen from the advert, (pictured below,) in the Marlborough Times. The puppet making workrooms were situated on the first floor of the building and Bob also had a shop next door at number 3 Kingsbury Street. Since the ground floor was, (as Rosemarie recalls – see text below,) occupied by the Labour Exchange following the Second World War.

During the first year of puppet making the whole of Marlborough and the surrounding landscape of fine farming land, forests and the shallow, upland valley of the Marlborough Downs, took on a Christmas card appearance under the snow and frost during the winter of 1947. Snow fell almost daily and the frosts each night kept the snow deep and crisp for about six weeks. Often the electricity supply was cut off for several hours in the daytime to conserve it for the public needing light and heat during the nights. When there was an electricity supply, everyone in the factory downed paintbrushes or whatever they were using and turned to help with anything needing power supplies. The girls became as handy as the men at using electric drills, sanding machines and lathes, although they were not too sure about using the circular saw! 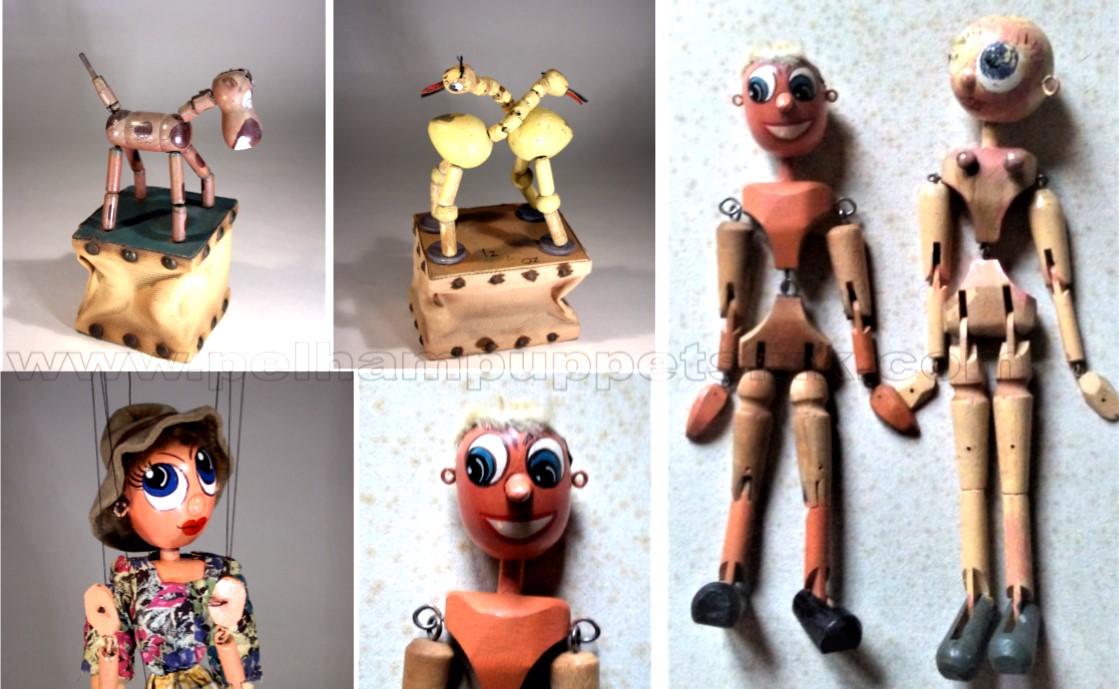 Above: Wonky Donkeys and Ostriches, Iz & Oz, and the bodies of the puppets revealing the ammunition partition bodies and clothes peg legs and arms. Rosemarie and Laura did most of the face painting in the first two years. 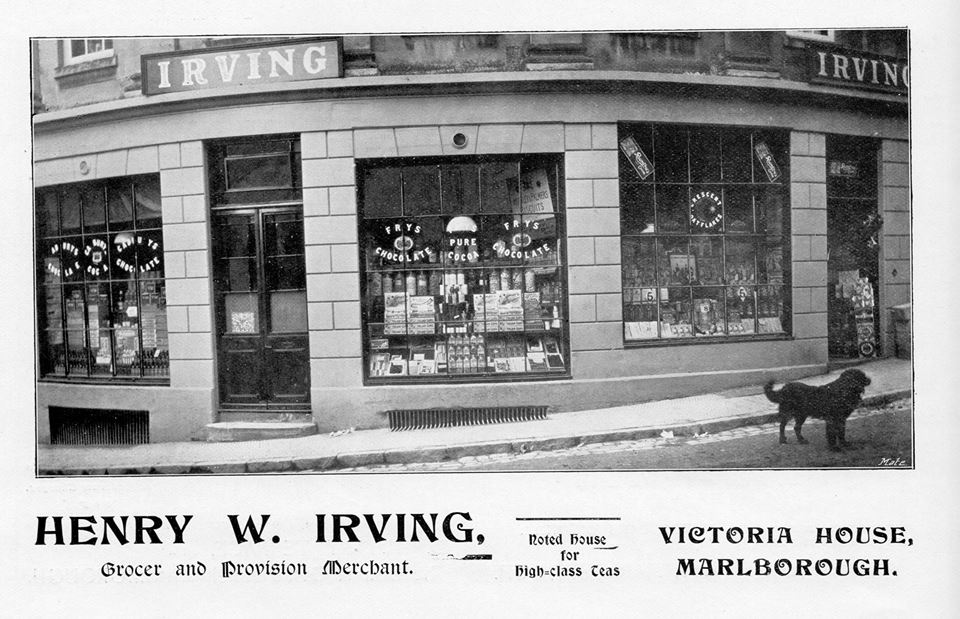 It was bitterly cold in Victoria House, so everyone had to wrap up like Eskimos to keep even moderately warm as the only heating in the building was electric fires, which were obviously affected by the power cuts. Bob’s concern for the welfare of his employees moved him to take unusual steps to ensure they had a measure of comfort. He recalled that at his home, in the stables, stood an old heating stove in the harness store room. He dismantled it and took it to Victoria House where it was soon reassembled and glowing merrily on a diet of odd bits of wood and anything else they could find for fuel, as coal was still rationed at that time.

They frequently experienced frozen water pipes too, but the ingenuity of this group of workers was not only confined to puppet making. Dot Mercer and Frank Clements daily carried a milk churn down Kingsbury Hill from her home, looking like Jack and Jill in the nursery rhyme but hoping that they would not tumble down the steep icy slopes! With their help, water was available for hot drinks and other needs. The stove boiled kettles, glue pots and even roasted chestnuts!

Victoria House was certainly an extraordinary place to work. The unusual product they were manufacturing and the happy family atmosphere, created a feeling of group endeavour that formed the basis of the company for years to come.

Most of the puppets depicted characters of different nationalities, such as Tyrolean boy and girl, Dutch boy and girl, Chinese boy and girl, although some characters useful for including in puppet plays, such as a King and Queen were produced, Bob preferred more nondescript characters that children could name themselves and create their own characters. 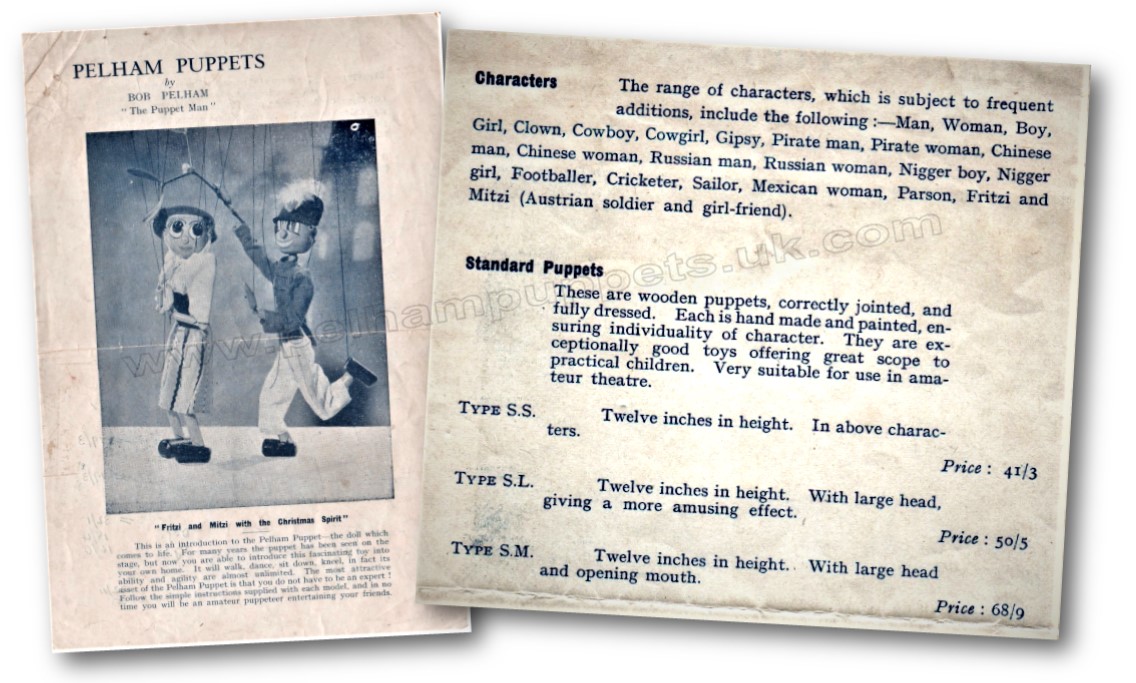 Making puppet heads was one of the greatest problems for Bob. He explained, “At first, I turned them on a lathe but they all came out in different shapes from ovals to squarish rounds. Well, I suppose it did mean their heads were all different and individual!” Once the heads were produced using the regular supply of coconut shy balls – rather than having to turn each one by hand, which took a lot of time and slowed up weekly production – turnover increased dramatically and the prices were reduced, making it possible for more people to buy them and more appealing to trade buyers and retailers. 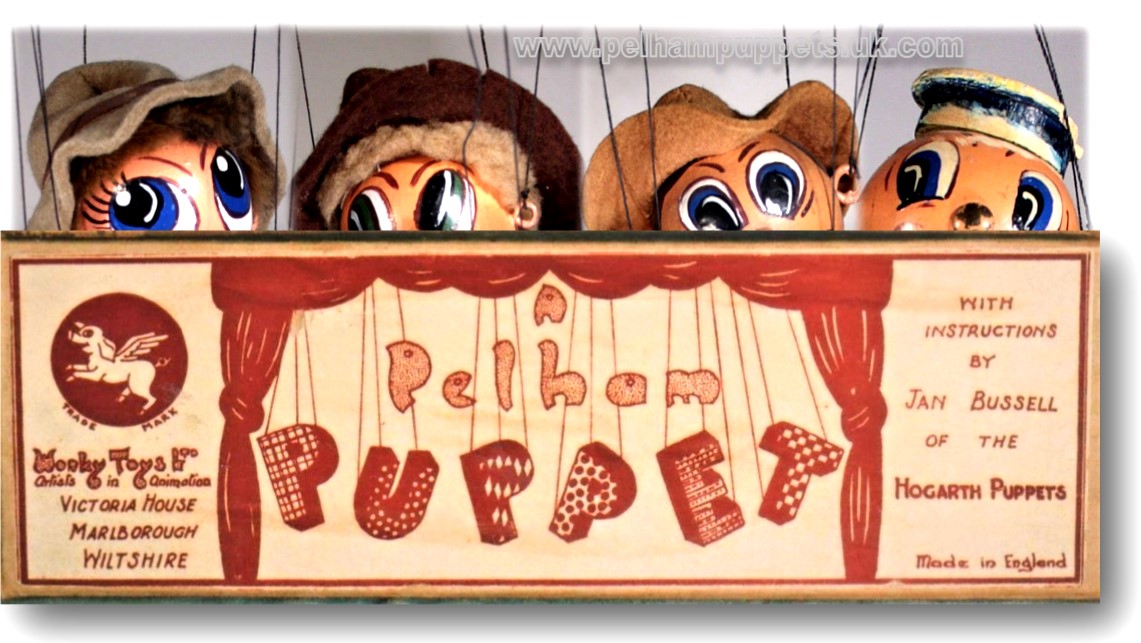 All sorts of ideas for characters were tried out, every one was sold of course but soon the range of characters had to be limited in number. The sales leaflet published early in 1948, lists 23 characters that were “subject to frequent additions.”  It took time to develop an in-house design and an identity for the brand and the small team of puppet makers, led by Bob, tried out lots of different characters to discover what eventually proved popular with the buying public. As the sales leaflet shows, the list of characters was very generic, ‘boy and girl, man and lady,’ and so on.

It is interesting to note that some puppets were labelled “Town Lady” rather than simply “Lady.”  The reason for this? Well, if the fabric used for a costume was of a more expensive or colourful nature, it was reasoned that the character had “dressed up to go to town!”

Some of the listings of the puppets below are educated guesses based on its appearance. Usually, a puppet was given its name by the new child owner. For example, the character listed as ‘Edwardian Lady’ might be called ‘Little Bo-Peep’ by the child that came to own it. After being passed down from mother to child, the name would likely stick. After 70 years it’s not really possible to accurately label the very early individual characters as being ‘such and such’ with any real certainty.

Below are a few of the puppet characters that were created in the first two years of production. 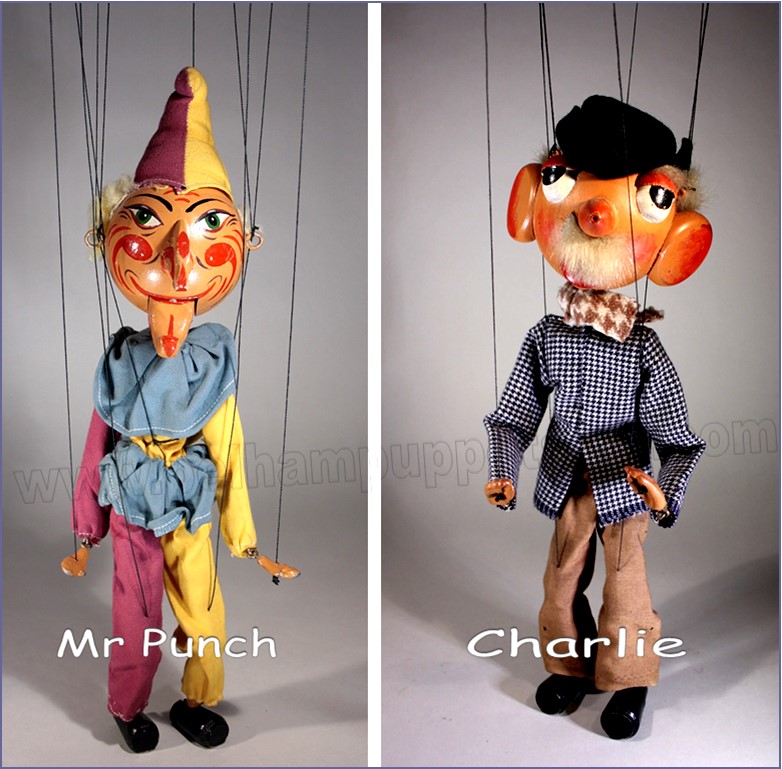 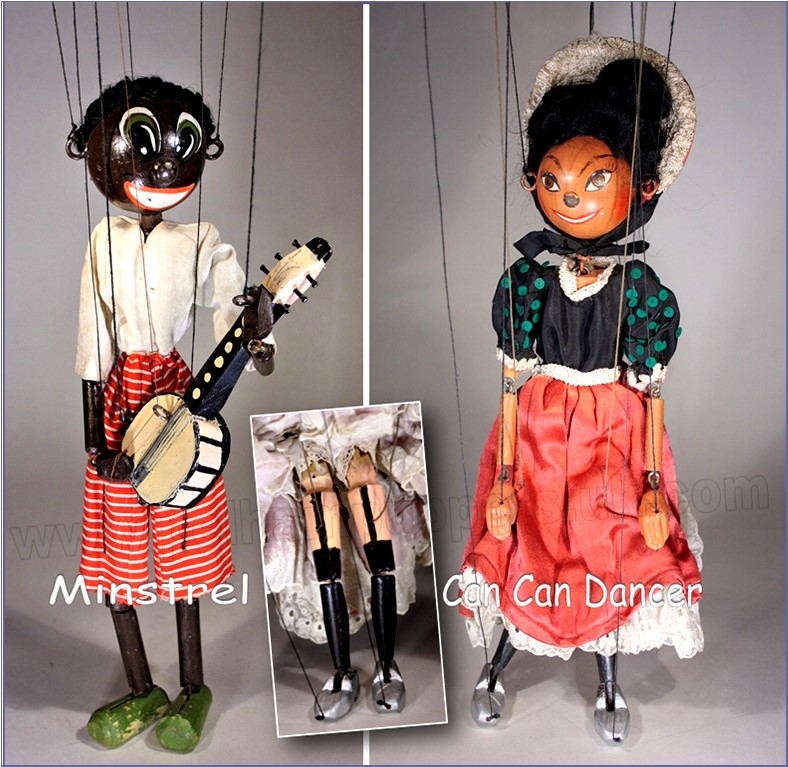 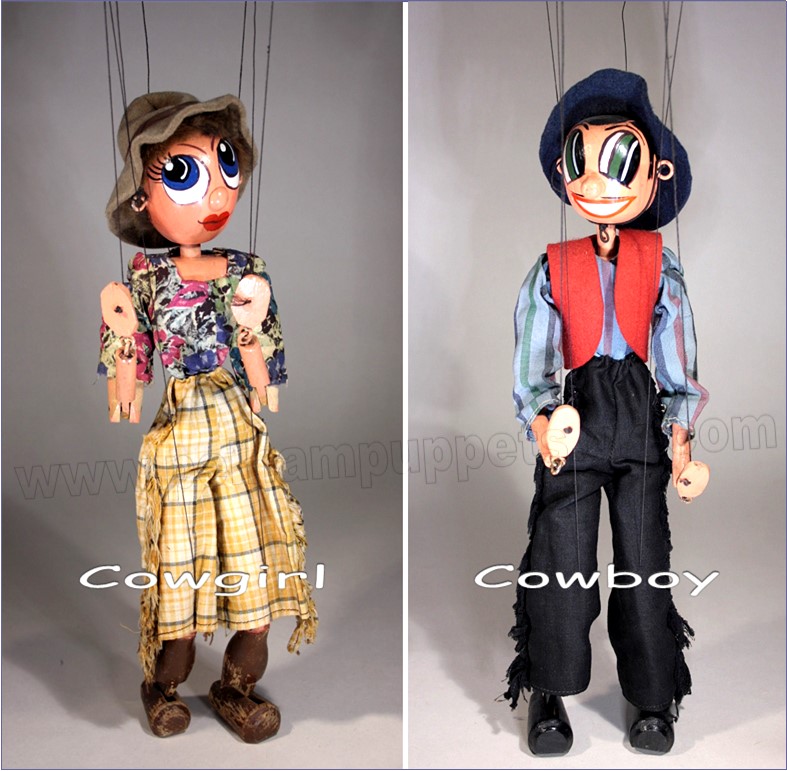 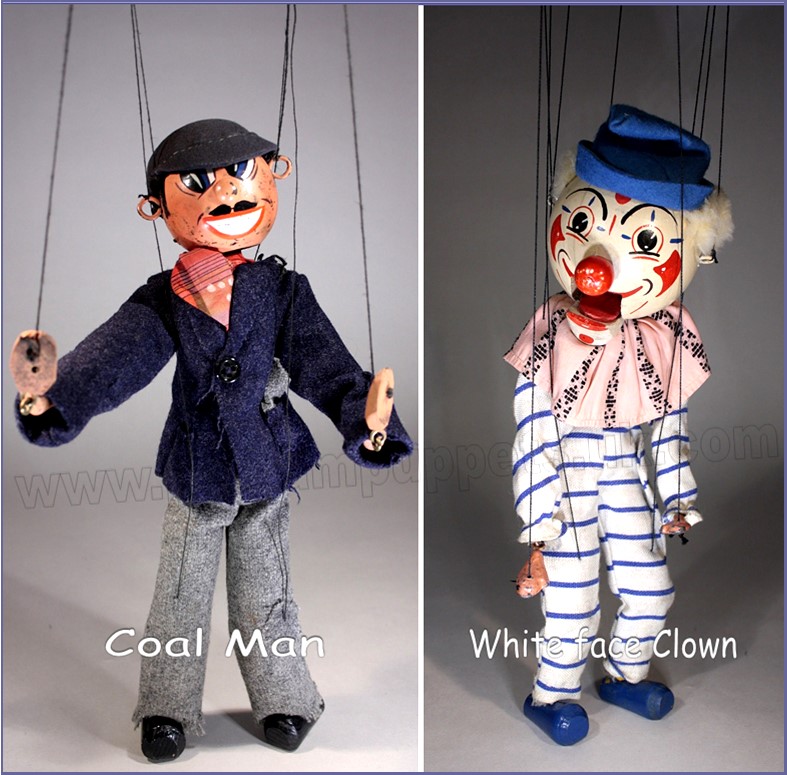 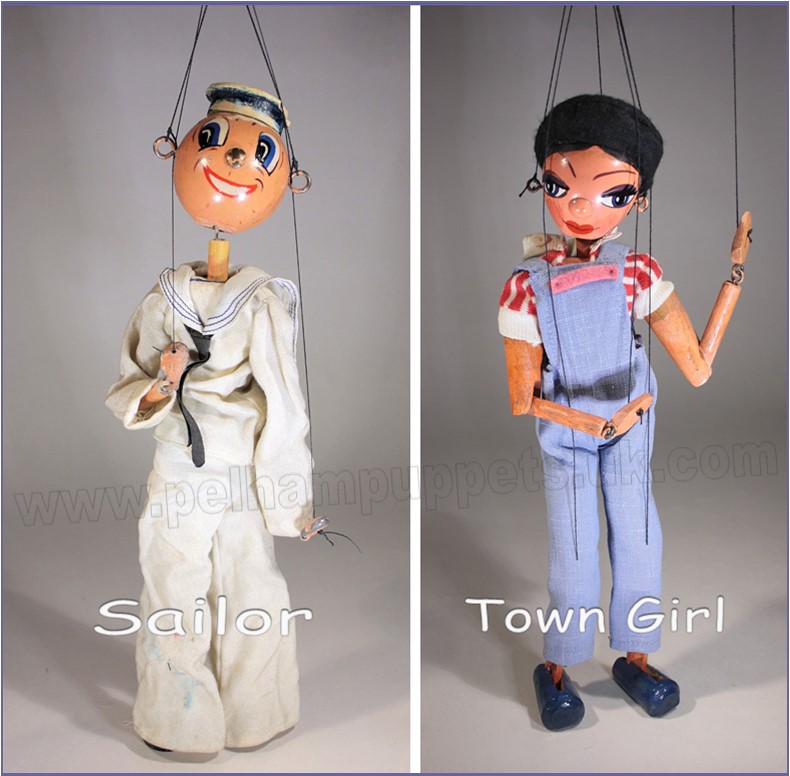 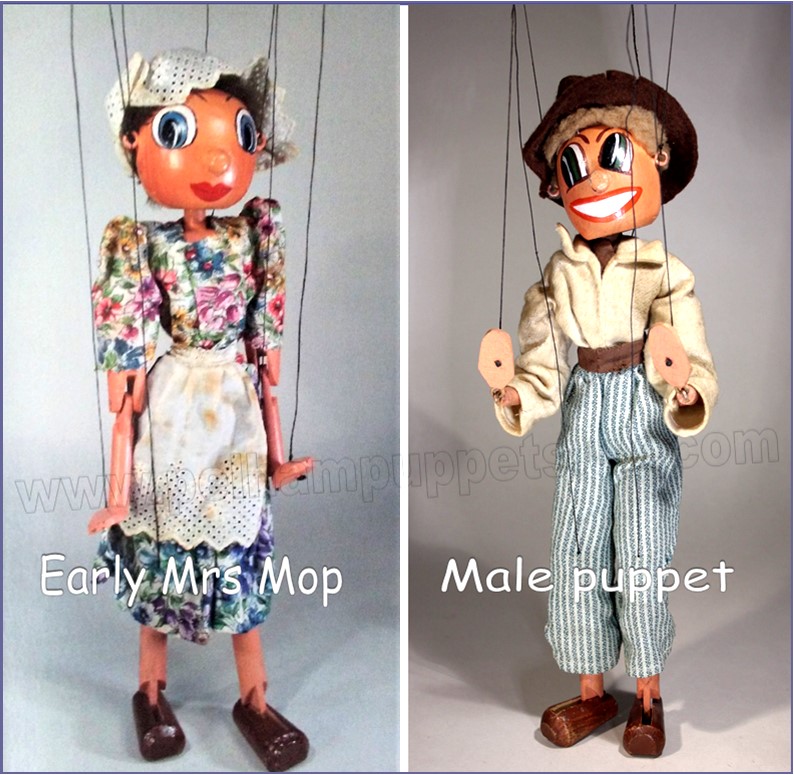 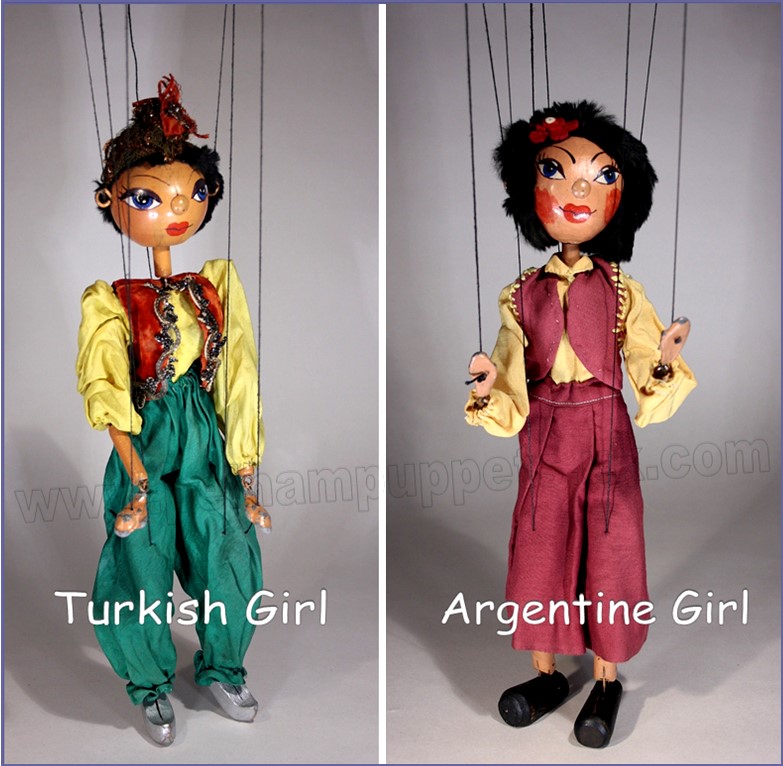 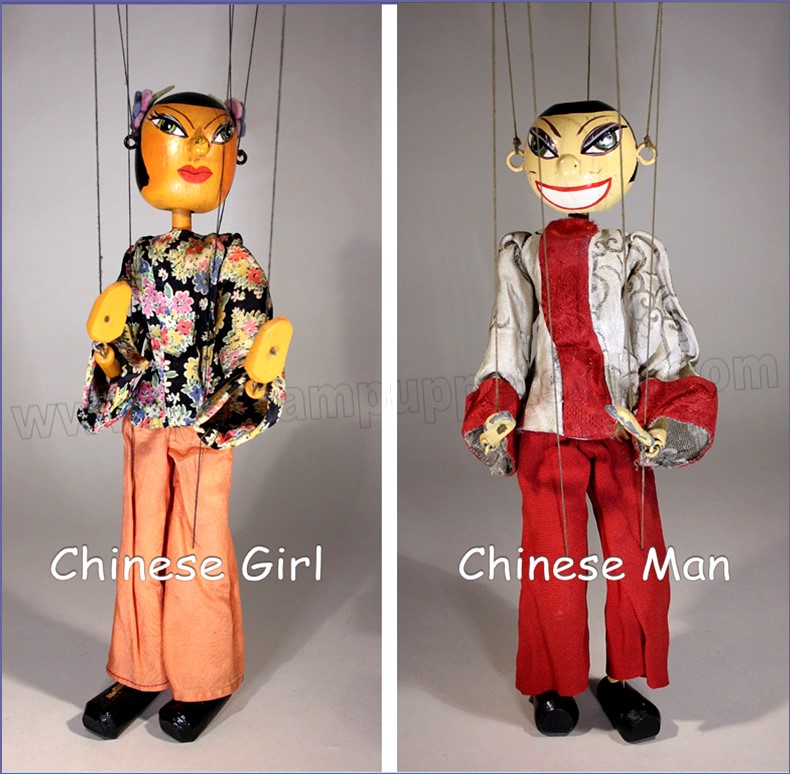 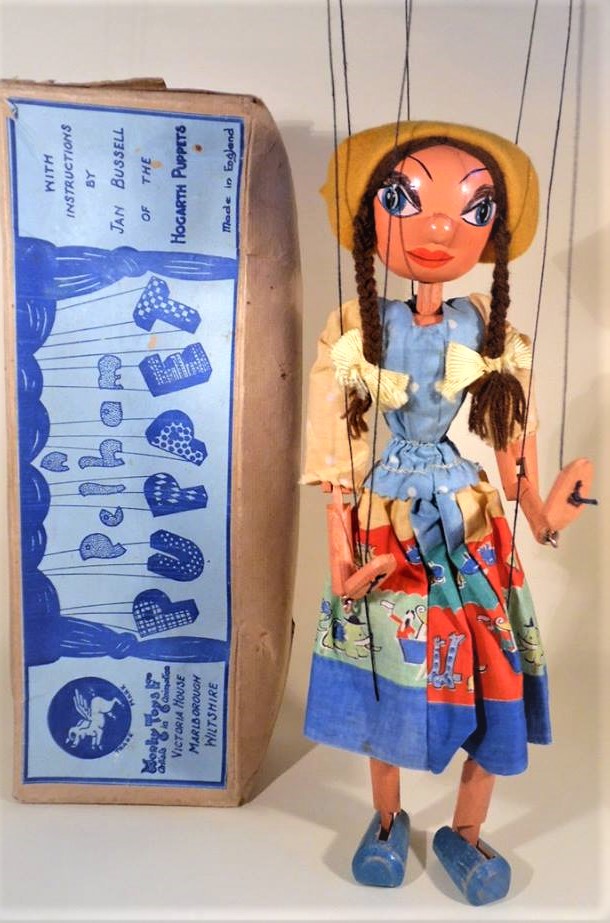 Note the fabrics used for these puppets. Due to shortages just after the war, obtaining a regular supply of material for dressing puppets became a considerable problem at times. The parachutes were cut up and the pieces dyed various colours in a metal bath tub .

Bob placed ‘wanted’ ads in the local newspaper on a regular basis and this meant he had a constant supply enabling them to maintain production. The staff also spent hours rummaging through their homes and attics, for unwanted, but pretty materials.

Mothers, aunts, grannies and friends were begged to turn out dress cuttings, laces, beads, furs and feathers. Rosemarie identified the trouser fabric for the Cowgirl as originating from one of her personal off-cast skirts.

More images and information will be added to this page shortly.

Additional background information about Wonky Toys and Pelham Puppets can be found in the “How It Began” page.