It was Bob Pelham’s desire to encourage groups of children to work together for the mutual enjoyment of puppetry that led to the formation of the Pelpup Club. This puppet club was something that became very important and personal to Bob. He wanted to develop a relationship with his customers and make sure they were using their puppets to the best advantage. 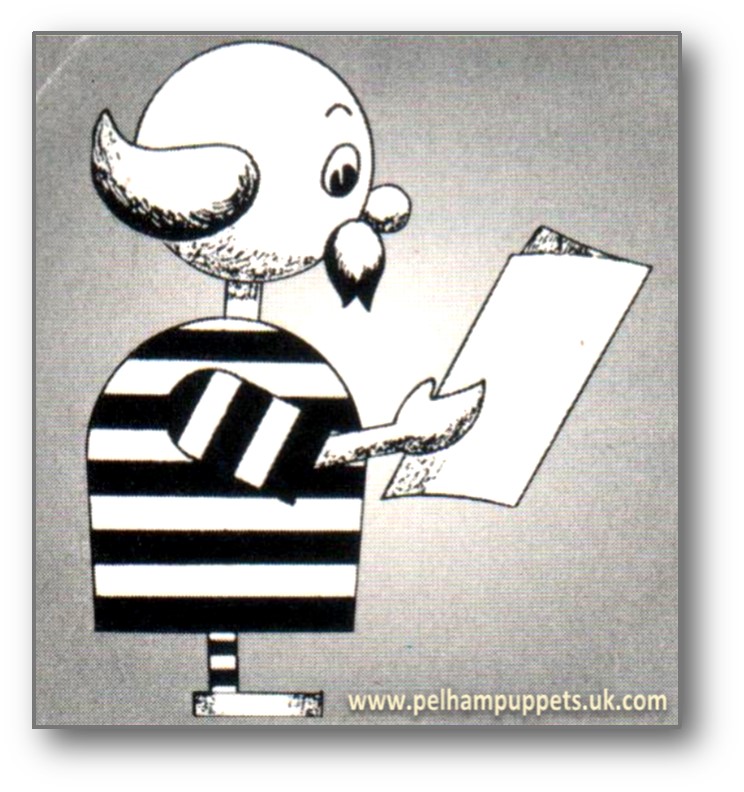 His introduction to the Club, appeared in the British Puppet Theatre magazine in September 1950. He wrote: “It was only because I daily get letters from some of those who own a Pelham Puppet, telling me about them and about their activities and seeking further advice and ideas for staging their puppets, also the constant request for plays, that I decided the only way to handle them was through a Club. So, the Pelpup Club has been formed and we are having a nice badge for members to wear.”

They wrote to him as a friend to ask for help and advice and report on their own puppet activities. He wrote back, in his own handwriting, to as many members as he could, in the same vein. That the club succeeded there can be no doubt, in addition to the letters they received every month there were also dozens of plays to read and competition entries to examine. One is led to wonder how he had time left to run his ever growing factory! He once remarked, “It really is a fascinating hobby and believe me, it wasn’t the hope of making money that turned my attention to puppets, but a genuine creative interest.”

The first issue of PELPUP NEWS was published in January 1951. The magazine included letters from members and ideas for using the puppets, (that were repeated in later issues right through to the 1960s and 1970s,) as well as the regular playwriting competition. It was really exciting to see your own letter or play in the magazine. 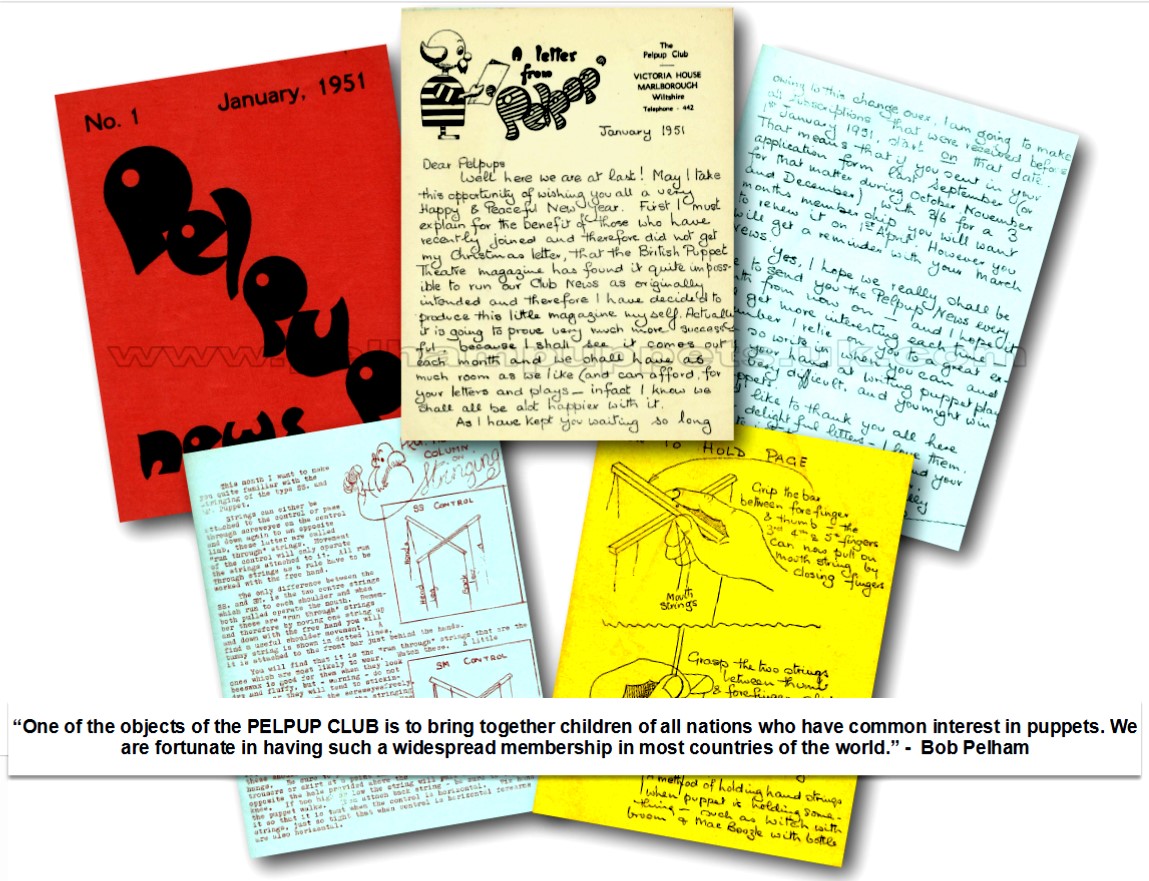 During his lifetime, Bob Pelham’s aim was to bring the fun and magic of puppetry to children wherever and whenever he could. His legacy lies not in the past, but in the future and it’s now well known that many young “Pelpups” have since gone on to work in the entertainment business today on all levels, including Oscar nominees, Olivier Winners and Tony Winners, because they started creating theatre with Pelham Puppets. As one person recently said, “You start with Pelham Puppets and it ends up taking you to the moon and back!”

The magazine was published every month until September 1955, issue number 57 when PELPOP explained in his opening letter that producing the magazine: “costs us much more to produce than we get from subsriptions and also, on top of all my other work in the factory, which seems to be ever increasing; it is a tremendous strain to be continuously thinking up new ideas for it. The Last thing I want is to let it deteriate. So the sad decision has been made – both my wife and I are extremely sorry about it. Now that does not mean the PELPUP CLUB ceases to exist. It will continue with life membership of 2/6d (12.5p) for which you get a badge and help through correspondance with your puppet problems.” 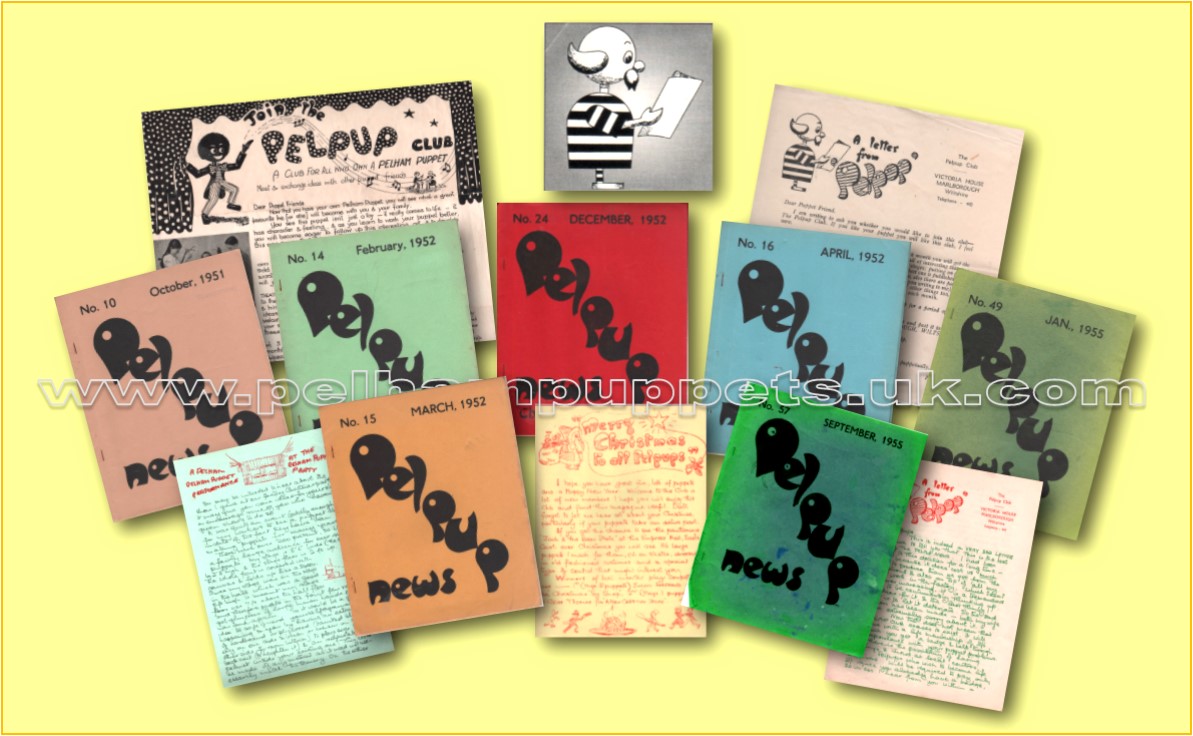 From 1955 to 1960 the magazine was randomly published on a few occasions, but it was from January 1961 that regular issues were published, with the first two issues entitled PUPPET POST. Since this title was already in use, Bob changed the title, (very wisely,) back to PELPUP NEWS in 1962. It was then published twice a year (summer/winter editions) until issue 46 in the winter of 1983. 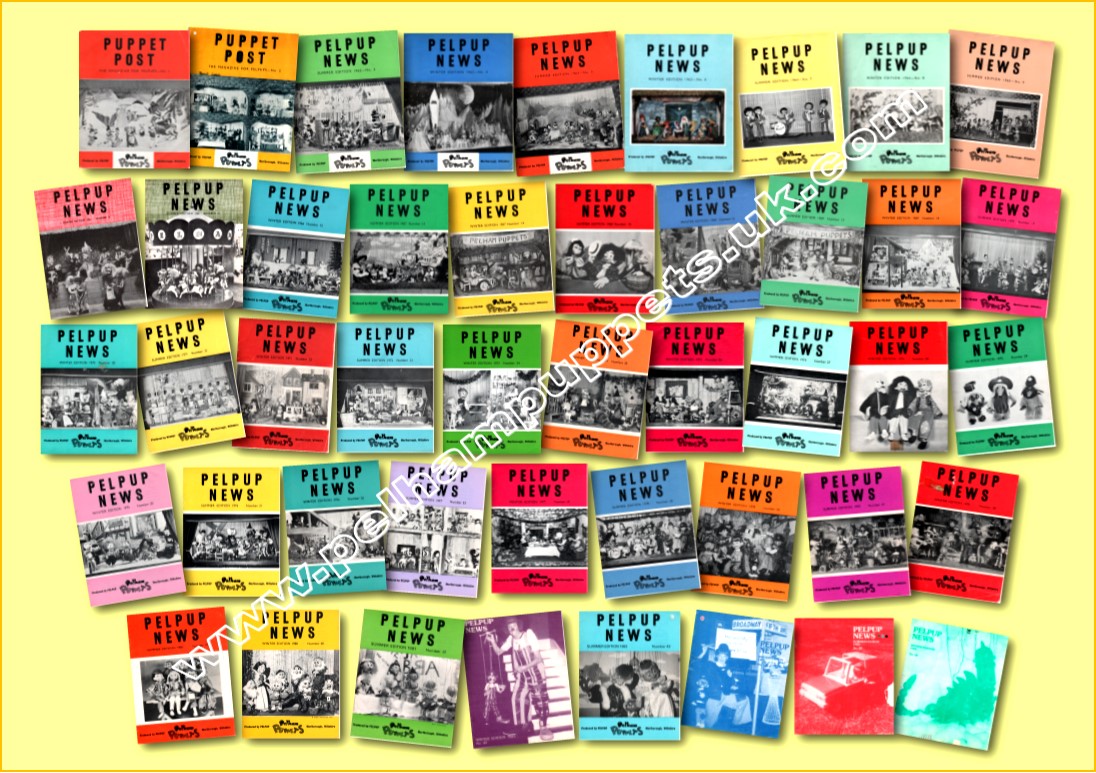 It would be another three years before it reappeared in an A4 format, by then, Mrs Pelham had sold the business and the factory relocated to Collingbourne Ducis, 10 miles south of Marlborough, under the management of the new owners. I produced the next four issues for the Company from No 47, Summer 1986 to No 50, summer 1987.

It was in issue No 48, that I shared the first part of the manuscript, “PELPOP” – The Story of Pelham Puppets, which was going to be serialised over the following three years. The proposal was to publish the magazine four times a year but it was discontinued due to falling membership and rising costs. The last issue was published exactly 40 years after Bob Pelham started Pelham Puppets.

For regular updates and information about PELPUP NEWS visit the Facebook page HERE.

The Pelpup News magazines featured ideas and suggestions for staging shows. Patterns for puppet costumes for making at home were often included as were ideas and suggestions for building home stages. I have collated many of these features into two folders. By clicking on either of the images below, you can obtain a FREE PDF version of the the files. Please note: they are for personal use only. Using the illustrations or reproducing the worksheets for commercial purposes is strictly forbidden. 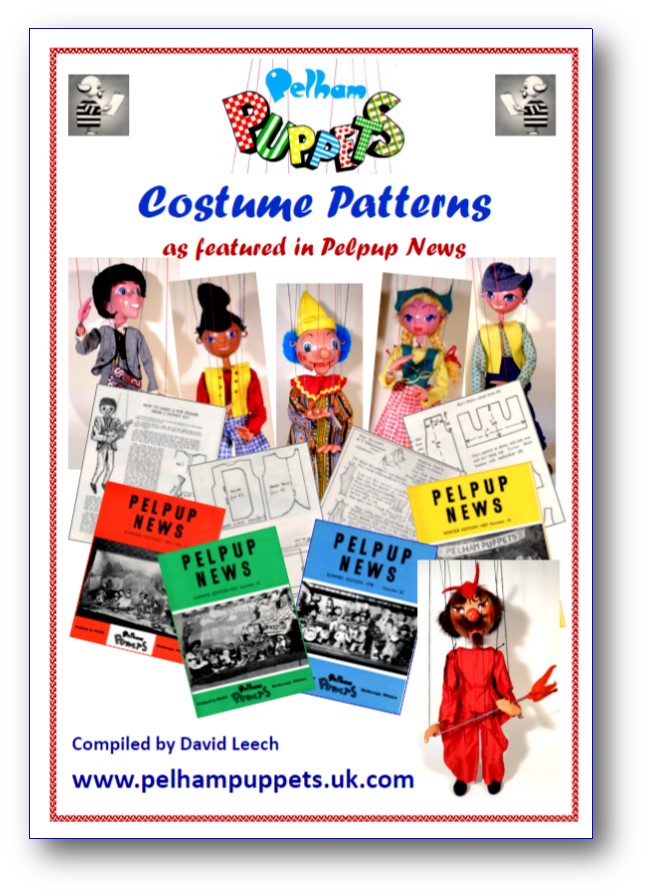 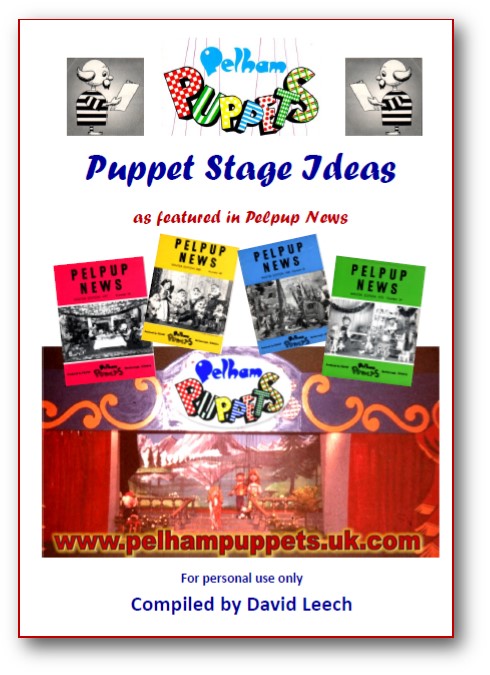 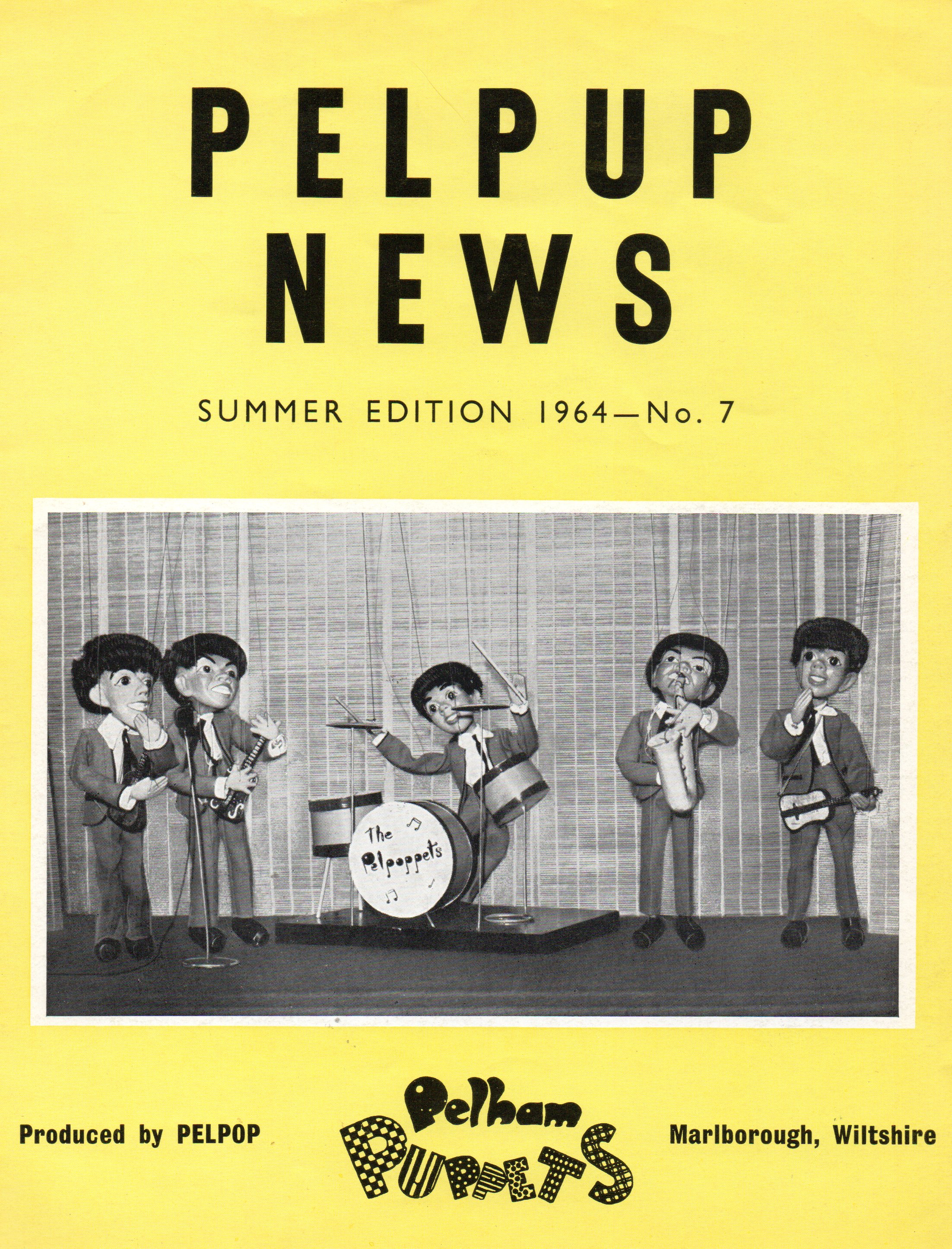 Initially, only the drummer and guitarists were made but very soon several of the women, (I was told from the sewing room mainly,) said to Mr Pelham, “Why don’t you have a sax player?” It wasn’t long before he appeared in the line-up too.

The Beatles or the Dave Clark 5?

When Pelpop appeared with his pop group on  BBC TV’s Blue Peter programme, they played to the Dave Clark 5 song, “Glad All Over.”

There were two very specific reasons why this song was used on Blue Peter on June 1st 1964.

Sid Long and Eileen Sims-neighbour, two of the employees who went with Bob to operate the puppets on the programme, (David Macey was the 3rd person, but he’d left the company by the time I started working there,) both confirmed that Bob loved using the drummer and if you saw him operate one, you’d see why.

Secondly, the song had recently been No 1 in the Charts so was a popular choice anyway. I would imagine the women in the factory would have urged him to choose a song they liked as well.

Even though the puppets were dressed in a similar style of suits worn by the Beatles in the early days and some people seem to think the heads look like Dave Clark 5, there was never any intention to make the puppets look like either group.

The story of the pop singer heads goes like this….

A head would begin with a plasticine model. Percy Mortimer  would often make these for him. (He didn’t do this full time, Percy had another business.) Bob had asked him to come up with a set of heads for a pop group.

A few weeks later, he still didn’t have them. So Bob went round to Percy’s place and asked where they were and when would he get them? Percy pulled open a large drawer, took out a lump of plasticine and while they were chatting, produced 4 or 5 heads within a matter of minutes!  He handed them to Bob and said, “there you are!” 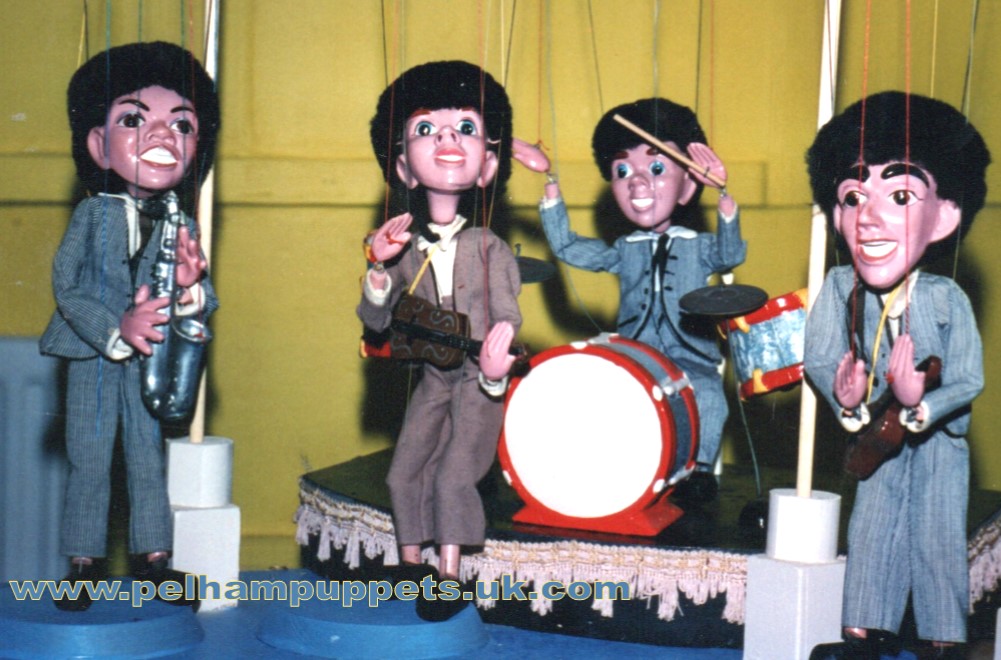 Any suggestion that these puppets “were meant to be” or “based on” the Beatles or the Dave Clark 5 is pure conjecture. The outfits for the Pelpoppets changed in time, to reflect the changes in fashion through the late 1960s into the 1970s  as can be seen in the photo above, from one of the Pelham Puppet factory shows that I put on in 1980. As Bob clearly stated in Pelpup News:

“They are not meant to look like any one particular group, they are just present-day types that can be grouped together as you please.”