In 1998 David wrote his book: COLLECTING PELHAM PUPPETS  This 116 page book includes a brief history of Pelham Puppets and contains hundreds of colour and black and white photographs of the puppets from 1947 through to the 1980s.

In 2008 David’s 2nd book PELHAM PUPPETS – A COLLECTOR’S GUIDE was published by Crowood Press.  This hardback book features “PELPOP” – The Story of Pelham Puppets and includes a tour of the Pelham Puppets Factory.

In December 2022 the film, PELHAM PUPPETS – The Never-Ending Story was published by the British Puppet & Model Theatre Guild. This film sets out to describe the legacy of one man, Bob Pelham, his achievements and how he came to influence the lives of so many people more than forty years after his Company, Pelham Puppets ceased production.

Filmed and edited by Brian Hibbitt and produced and directed by David Leech, it is available in DVD and Blu-ray format and available ONLY from the Guild website here. See the video trailer here.

Prior to these publications David Leech produced four issues of PELPUP NEWS in the mid 1980’s and a quarterly magazine, “YOURS PUPPETUALLY” in the 1990s. 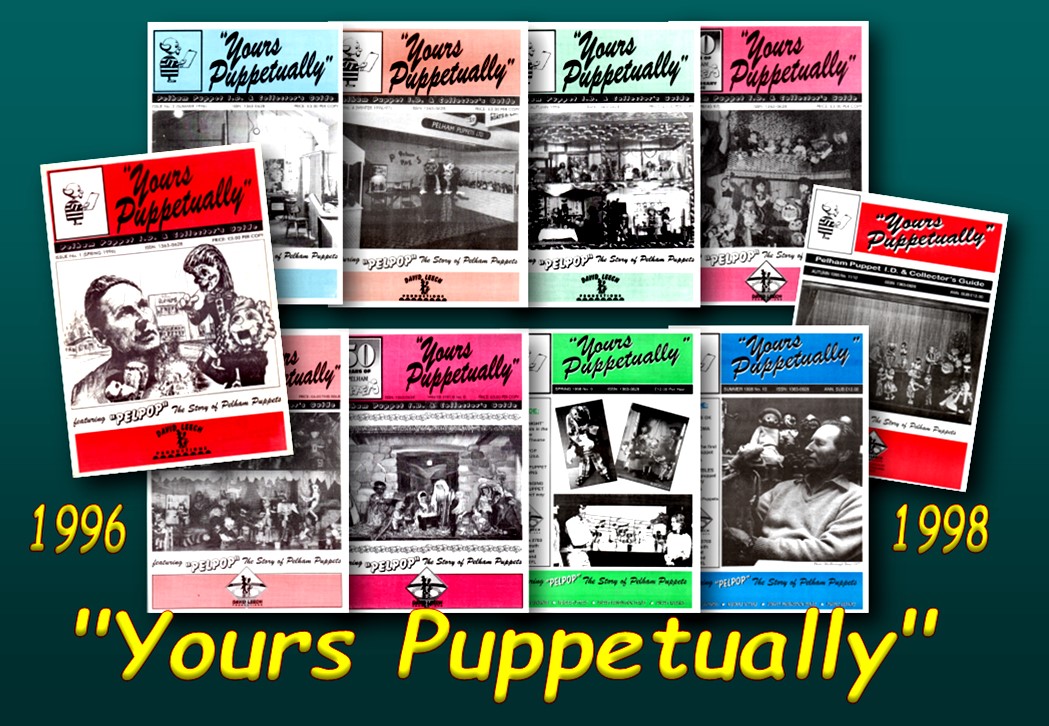 In 1995 it became apparent that there was renewed interest being shown in Pelham Puppets, especially by collectors, so I dug out my notes and manuscript and resumed my research and writing beginning with the publication of my quarterly magazine, “Yours Puppetually” in 1996.

This was a quarterly magazine for collectors and served as the initial platform for getting the Story about Pelham Puppets “out there.” Up until then, there was very little or no information about Pelham Puppets to be found anywhere. (Although I had started to serialise the story in PELPUP NEWS between 1986 and 1987 when I was producing the Club magazine for the new owner of the Company.) The magazine title was taken from the way Bob Pelham signed off his letters to ‘PELPUPS’ – members of the PELPUP CLUB – and in the instruction leaflets.

In addition to featuring the story, PELPOP – The Story of Pelham Puppets, each issue contained illustrated articles about the factory and the puppet production process as well as information about the various puppets and excerpts from PELPUP NEWS. As a bonus, four issues included a double page spread with colour photographs, many of which had never been seen or published before. 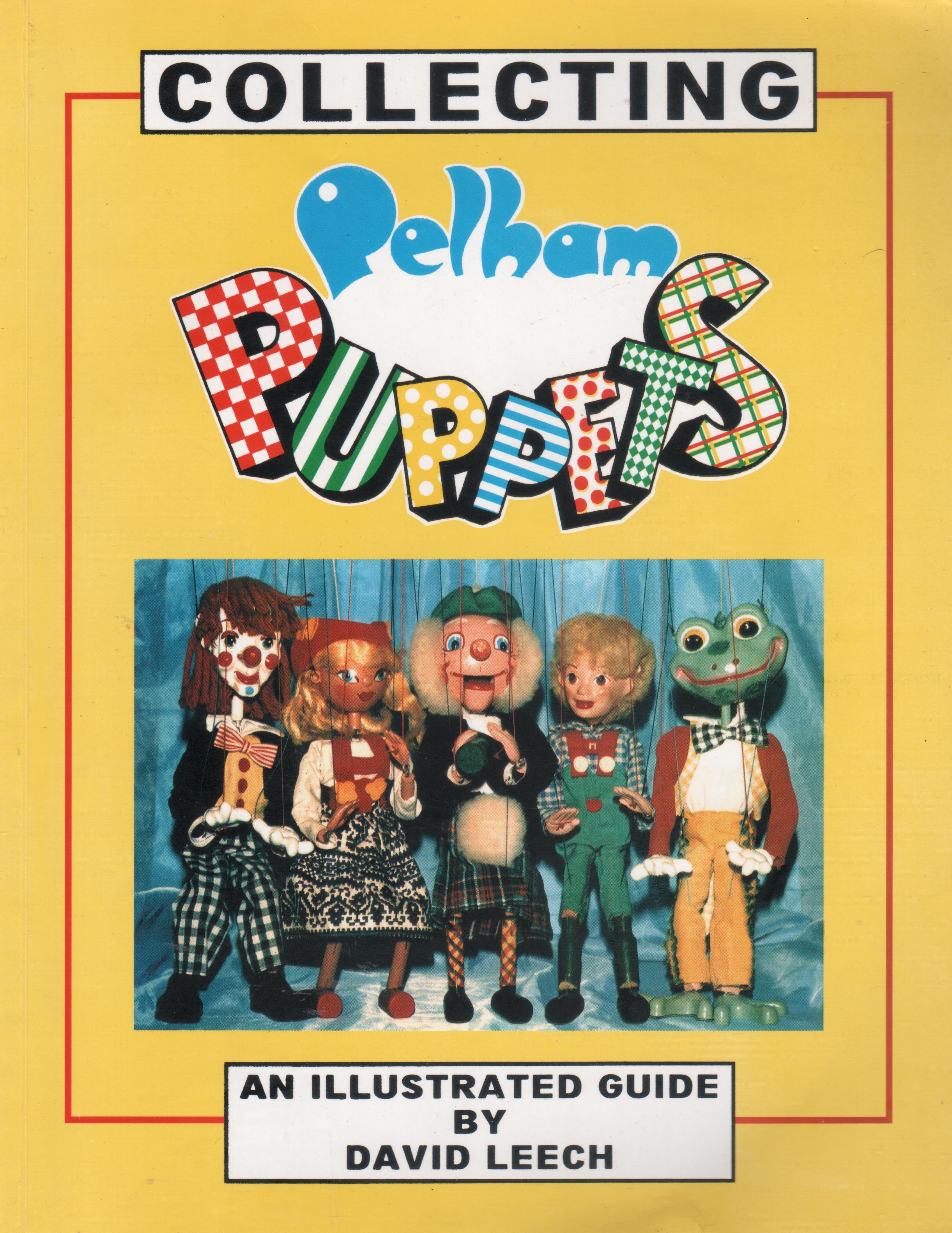 This was the first book of its kind, exclusively devoted to the subject of Pelham Puppets and I attempted to share some information about the puppets and their history and background that people were so eagerly seeking to obtain at the time. 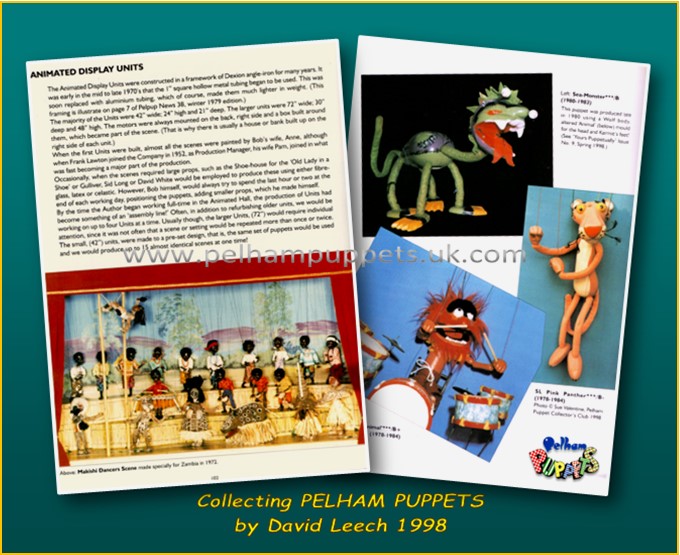 This publication aimed to provide an overall view of Pelham Puppets in general and only featured a synopsis of the Pelham story and concentrated on including as many photographs as possible of the different types of puppets produced over the years.

As an aid to Collectors, each photo had a ‘star rating’ that helped to provide some guidance about how rare, sought-after or popular a particular puppet was regarded at the time. (Some collectors describe some puppet characters as “common,” – I prefer to say, ‘popular.’ There is nothing “common” about Pelham Puppets.  Each one was hand made and painted by hand, no matter how many characters were produced.) 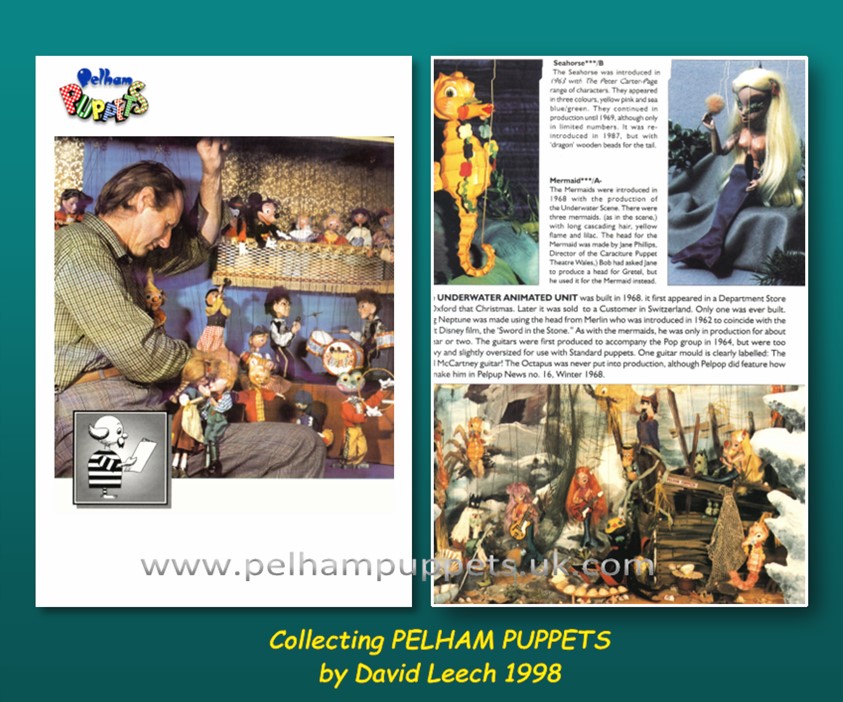 Although many of the photographs had previously been included in the magazines, this book provided the opportunity to share them in clear, full colour. This was particularly good for showing the Animated Display Units and photographs I had taken, back in 1980, of some puppets that Bob Pelham had on show in his office display cabinet.

In addition to my own photographs, several people also provided some their own too and others allowed me to take photographs of puppets from their own collections. I was very grateful to Peter W. Card for the chapter about pricing and help with categorising the valuations of each puppet included in the book. 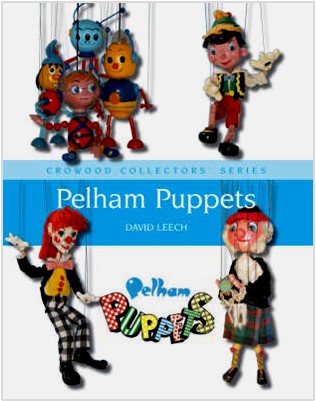 It is now 14 years since my book was published and I’m pleased to see it has 5 -star reviews wherever comments and reviews have been shared online and I’m very pleased that so many people have enjoyed reading it. I was told to expect that there would be the odd nit-picker trying to point out errors and criticize what has been written, but that has never bothered me and never will.
Bob and Anne Pelham were very generous and kind to me and they always encouraged and supported me from a very young age. The book has been a major part of my life’s work and a labour of love and I’ve always been determined that his work and legacy should always be remembered.
My work on the book started when I was 19 years old in 1973 and I had many opportunities to talk with him and the people who had worked for him from the beginning, although only a handful of employees from the early days were still working in the factory by that time.
He would often get dates and other minor details wrong when trying to recall things I asked him about and he’d just say, “Oh go and ask Joan or Ruth or Sid, they probably remember more than me!”  He was not concerned about the past. His attention was always in the present and his sole aim was to bring the fun and magic of puppetry and puppet theatre to children wherever and whenever he could.
For many of the visitors to the factory, viewing production would seem almost haphazard but everyone knew what their job was and simply got on with it.
The result was a very contented and loyal workforce and somehow, thousands of beautiful puppets emerged, each week, from what, on the surface, appeared to visitors, like organised chaos! He held a great affection and respect for all who worked for him at the factory, because they were helping him to fulfil his “dream.” 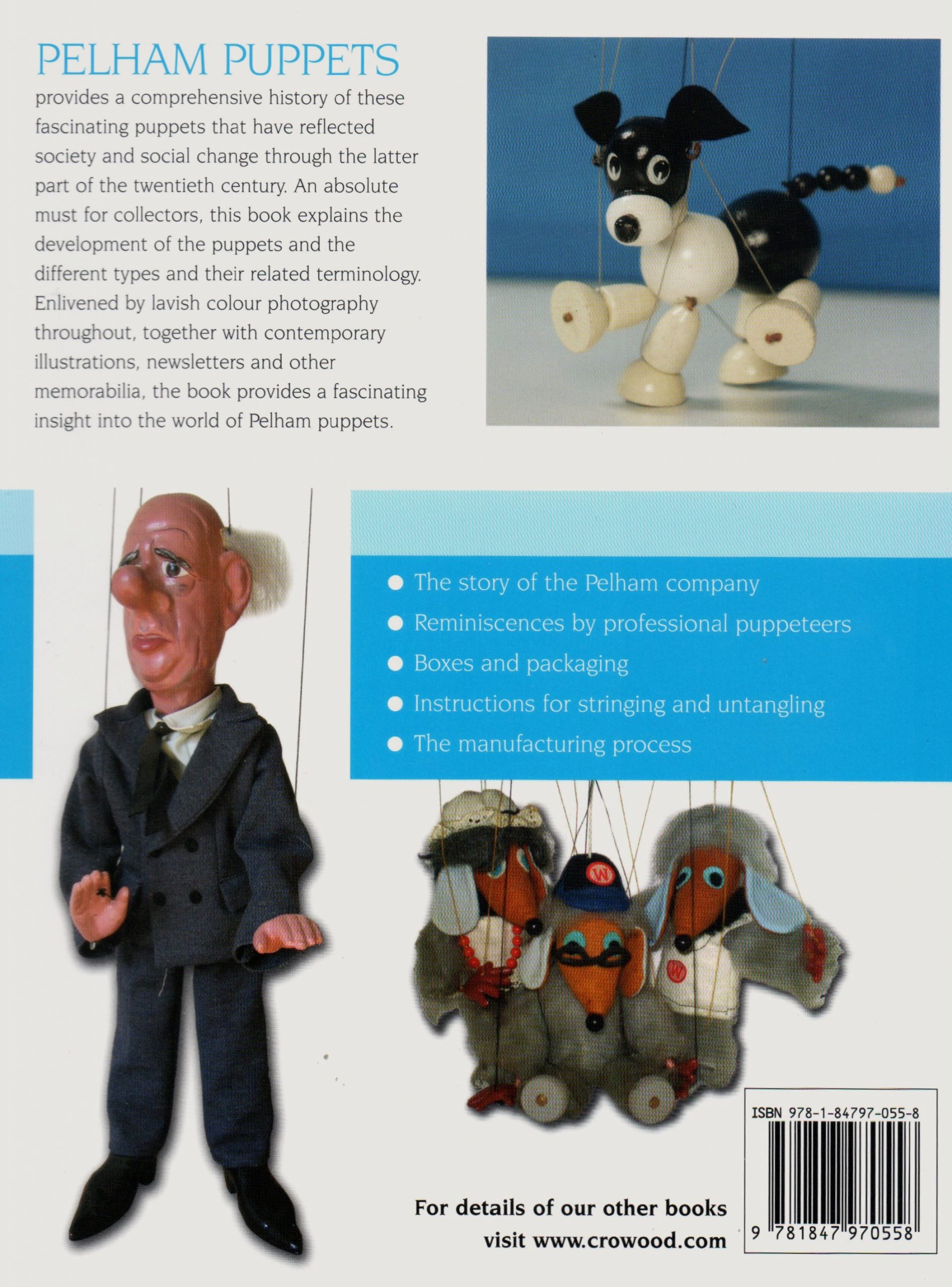 This is how it began:

It was one evening in November 1973 that I was sat by a roaring log fire in the Pelham family home, when Bob Pelham expressed concerns about the business and the thought of giving it all up. Mrs Pelham assured me that he was not serious. He frequently worried about the continuation of the business and the families that he employed at the factory. It was that evening that I began my research and to find out how he started the puppet factory and how he developed it into the large and successful enterprise that it had become.

Although I started to collect material and old newspaper reports from the Marlborough newspapers and old editions of Pelpup News, it would not be for another couple of years that my research really got under way when I was employed full time at the factory. All the information was at my fingertips!

By far the majority of the ladies that were employed there had been there for twenty or more years, some from the very beginning! They all had a story to tell and slowly but surely I began to piece the massive jigsaw of the story of Pelham Puppets together. 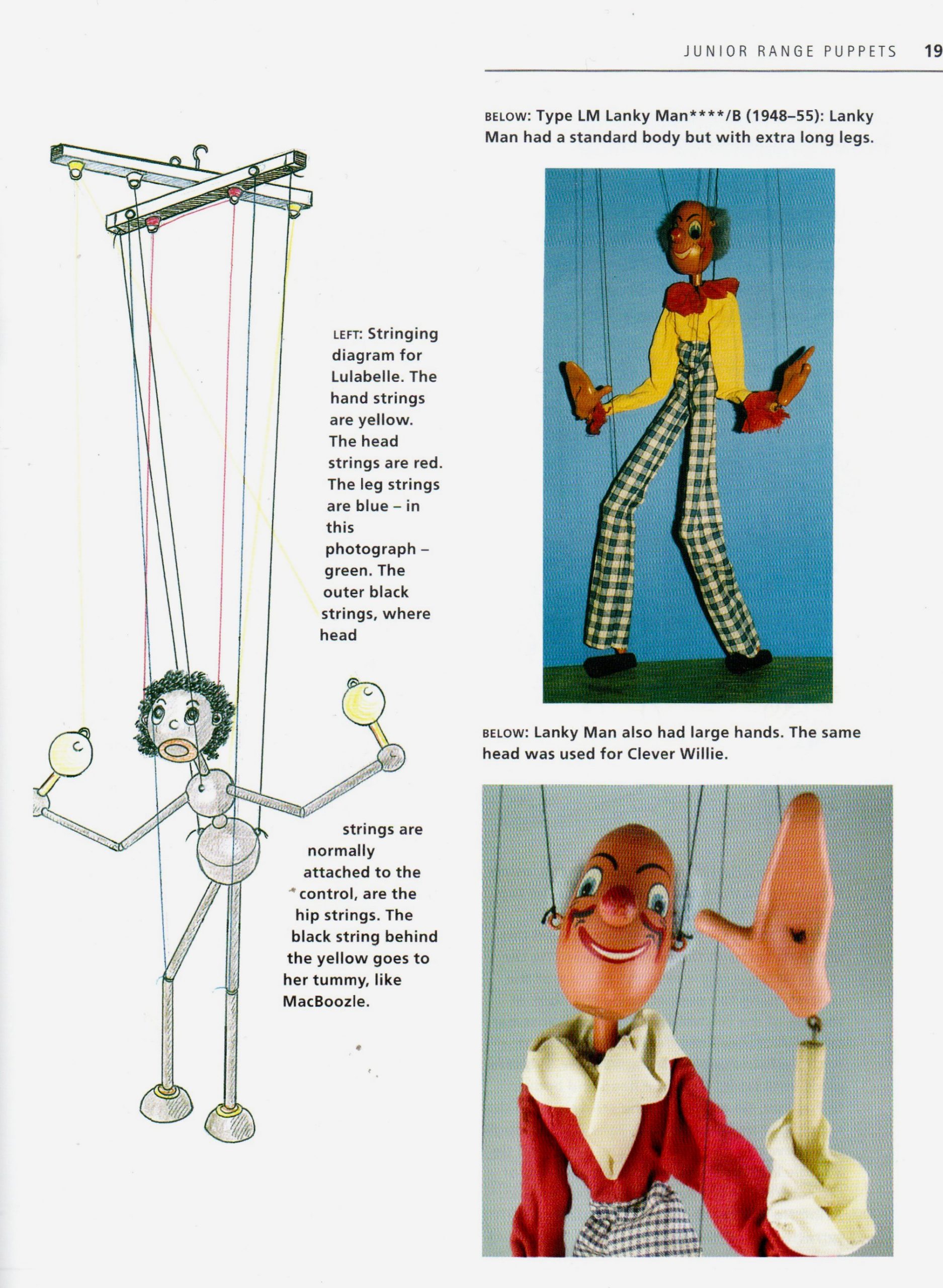 Mr Pelham’s initial reaction to the idea of a book about himself and Pelham Puppets was to say that he couldn’t imagine anyone would want to read it, but the very next day he called in with his ‘big album’ – a huge scrapbook filled with news-cuttings and photographs covering the period from 1947 to about 1958. From that day forward, he would bring me additional photographs and old issues of Pelpup News almost daily.

Each day when working alongside him, I would ask him about various things he had been involved in or puppets that had been produced, but he had a terrible memory for dates and events and often replied with, ‘You’d best ask Eileen or Joan about that,’ or respond with a question, ‘What? Did I do that, when?’

At that time however, the Company was facing a difficult time and his mind was occupied more with the present and worried about the future. Then the unthinkable happened and he was gone. He died on  June 19th 1980.

In spite of her great personal loss, Mrs Pelham continued with the support that Bob had provided me with and introduced me to a close family friend in Dorset, Michael Stannard who helped greatly with preparing the initial draft manuscript and additional information that would not have been available from factory employees and newspaper articles alone. Incidentally, it was Mrs Pelham who came up with the title: “PELPOP – The Story of Pelham Puppets”