No one will ever know to what extent Bob Pelham touched young lives. So many people have related about ‘the moment’ in their lives when they first came into possession of a Pelham Puppet and how it became a turning point and their lives were changed from that moment on by the creative genius of Bob Pelham. 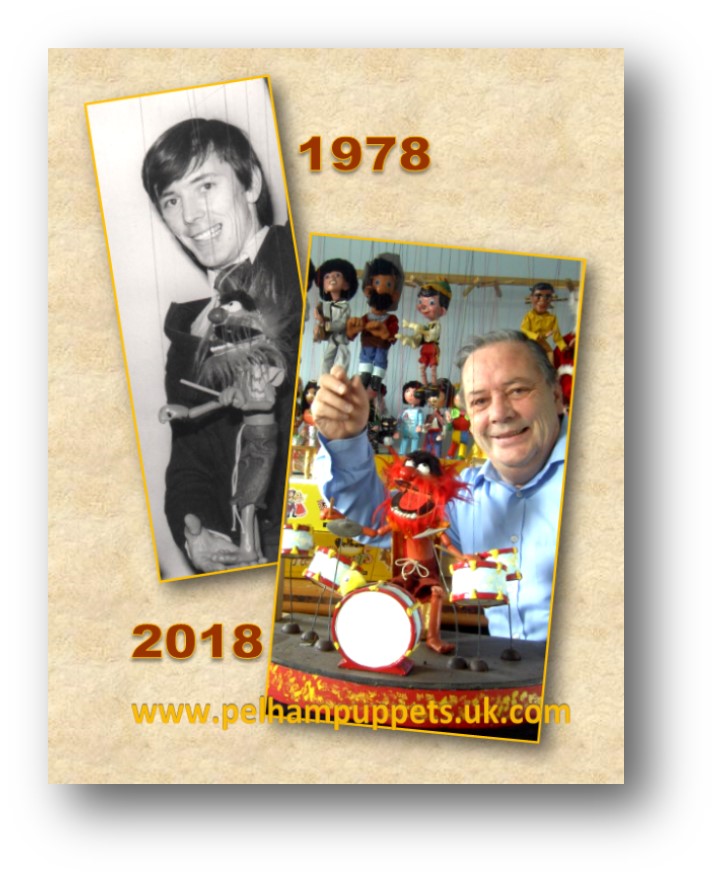 Hello! I’m the guy behind Pelham Puppets! I’ve been standing behind them, above them and around them for over 50 years now. I’ve even tried to get away from them a few times! But they always crept back into my life, so I’m stuck with them, which means you are stuck with me!

I have vivid and affectionate memories of my time working at the factory and living in Marlborough, (my daughter was born there,) it was not like work for me really, simply an extension of a hobby, and I was eager to learn about the whole puppet making process and later, how it all began and was built up.  Bob and Anne Pelham were always very kind, encouraging and generous to me and my family, that’s why it’s so important to me that I do what I can to keep his legacy alive and with their help and support, wrote about the history and delevopment of the Company. 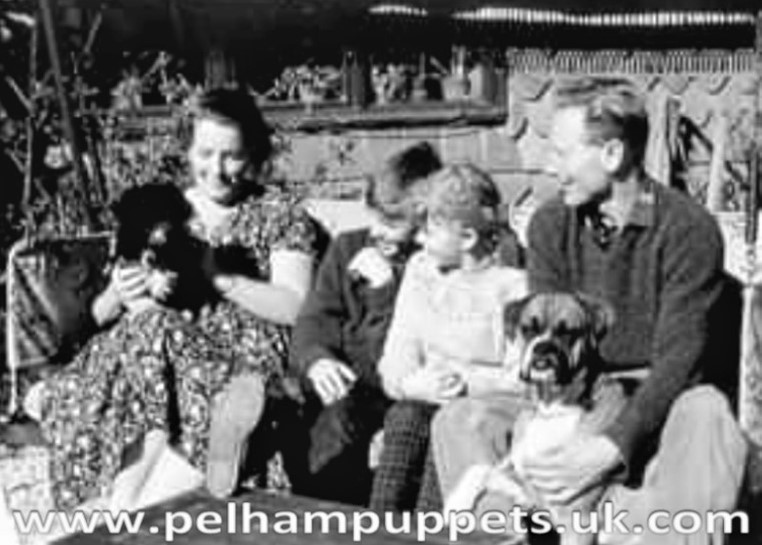 He encouraged and inspired so many young people to actively pursue the art of puppetry and many have since gone on to become puppeteers, theatre producers and some even went on to create some of the best children’s television shows in the 1960s and 1970s. I have now re-created my own shows which makes up the main part of my work these days. 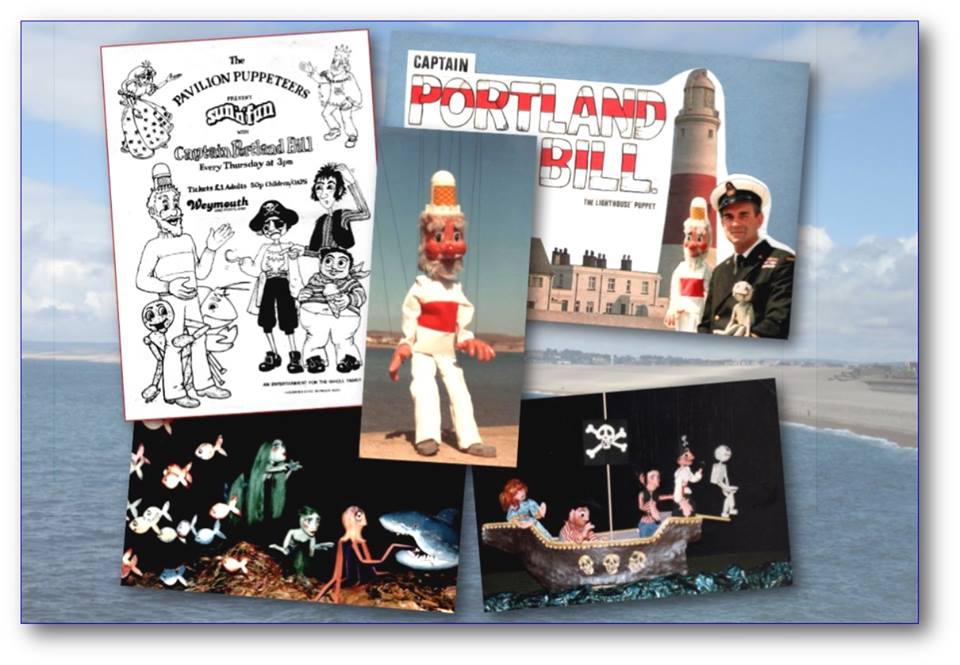 A little over a year after Bob Pelham died, I relocated to Weymouth in Dorset and set up my own puppet theatre, based at the Weymouth Pavilion. It was called the “Capt Portland Bill Puppet Theatre” and after taking on an excellent team of employees, we staged summer season shows and conducted puppet workshops in local schools for several years. I later worked in TV and theatre, not only making puppets and marionettes for TV, stage shows and pantomimes, but also as a performer and puppet operator on many occasions. Eventually, I concentrated on making puppets for other people in addition to producing a small range of puppets for children to use and play with.

In recent years I organised two Puppet Festivals in ‘partnership with’ The British Puppet & Model Theatre Guild. (I am on the Council of the BPMTG. I was Editor of the monthly (later bi-monthly) Guild Newsletter from 2008 until 2018.) 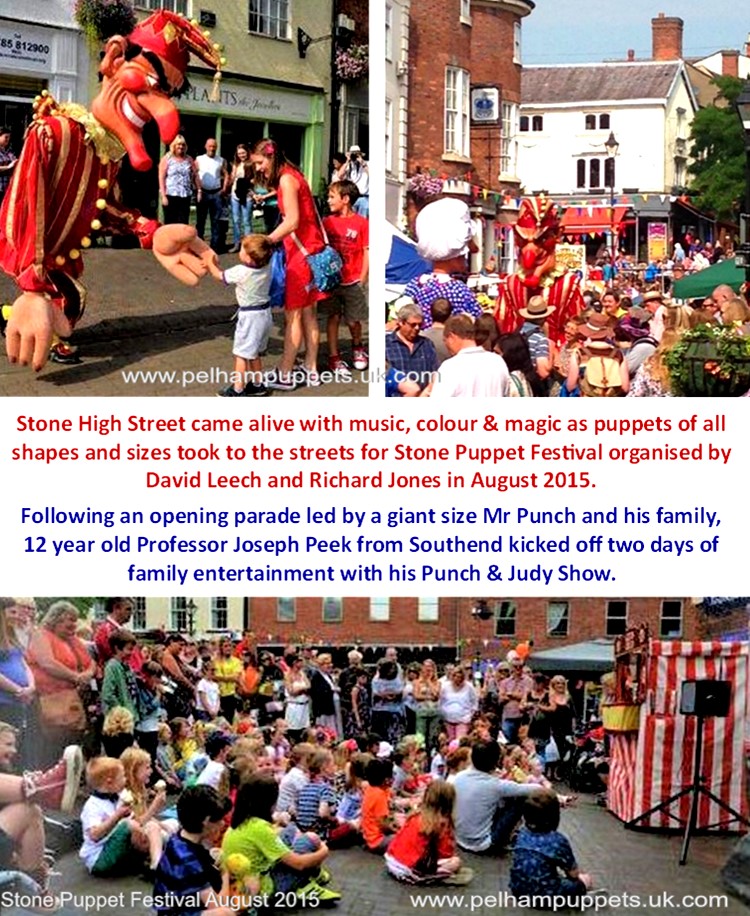 The first Puppet Festival I organised was in August 2015 in my home town of Stone Staffordshire. This was a weekend of 40 puppet shows, workshops and exhibitions all centred in the Market Square, High Street and the Crown Hotel. It came about after a chance meeting with Richard Jones one evening in January of that year in the Crown Hotel bar. We started chatting and the conversation turned to what could be done to liven up the town centre and provide some family entertainments from time to time. By the time we parted a couple of hours later, we had arranged to meet again a few days later and discuss the idea further.

The whole event was organised within four months! After contacting the Chairman of the BPMTG and the local Town Council we set about inviting the local schools and other community groups to get involved; investigated how to raise the funding for the project, and I invited puppeteers from around the country, to present shows, exhibitions and workshops. The local press stated, “ the festival captured the hearts of children with Punch & Judy shows and all manner of marionettes…. All in all a wonderful weekend’s entertainment for children in particular and the child in all adults who suspended belief for the two days.”

The next Puppet Festival I organised was Marlborough Puppetry Festival that marked Pelham Puppets’ 70th anniversary. (1947 – 2017). Details about this event can be found here.

In 2019, I decided to resume producing and staging shows again. I staged my first performance in over 20 years, in Marlborough Town Hall for an invited audience on the day the Bob Pelham Blue Plaque was unveiled.

Unlike the full scale professional shows that I produced, with the superb help and talents of a great team of people, in the Weymouth Pavilion in the 1980s, due to only having limited space, (working from home,) it was only possible to create small scale shows that could be presented in local schools and with the help of two, very capable and talented assistants, we staged weekly shows and puppet making workshops in Stone and Stafford during the school summer holidays. 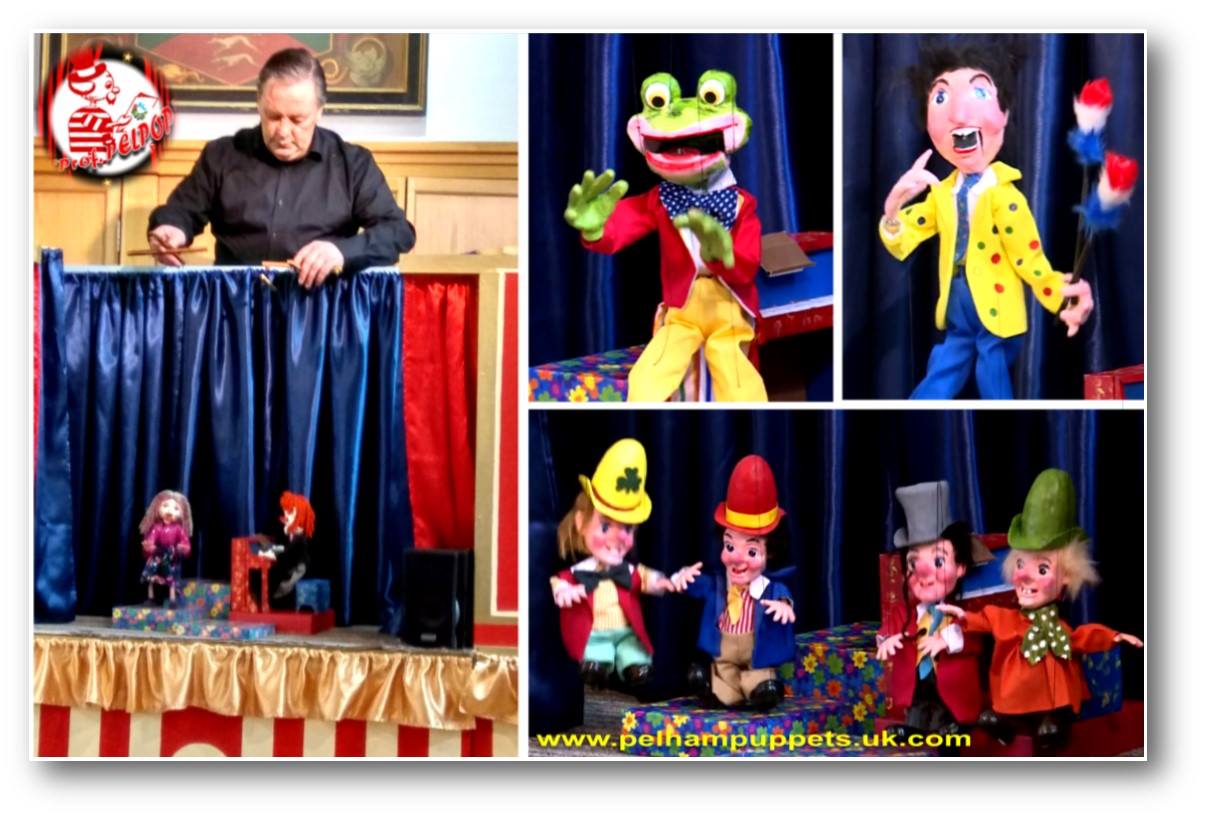 By the close of 2019 we had started to receive regular bookings in schools and libraries all over Staffordshire and by early 2020, several school bookings had been confirmed, that were due to begin in April. Unfortunately, by then, the UK had gone in to ‘lockdown’ due to the Covid-19 pandemic. Information about current plans for future shows and activities can be found here and I post regular updates on the Face Book page here. 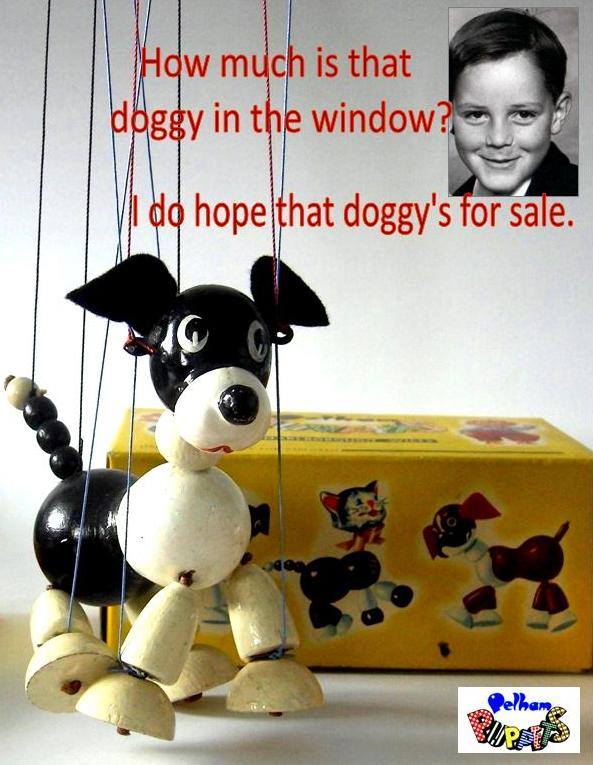 I guess I first met Bob Pelham on my eighth birthday. I had asked my parents for a dog. What I got was not quite what I expected. It was a dog alright, a little black and white one – but there were strings attached! He had coloured strings that led up to a wooden control with the name Pelham Puppets indelibly printed onto the cross-bar. To my great delight I took him to school to show him off to my friends. No one else seemed to share my newly found interest, but that puppet became a treasured possession and I still have that puppet to this day.

I was twelve years old when I actually met Bob Pelham at the factory in Marlborough, for the first time in 1966. He greeted me with a firm handshake like he was meeting an old friend. I was given a grand tour of the factory and after a phone call to my parents, it was arranged for me to stay overnight at his home and return the following day, as it turned out, with more puppets than I could comfortably carry! 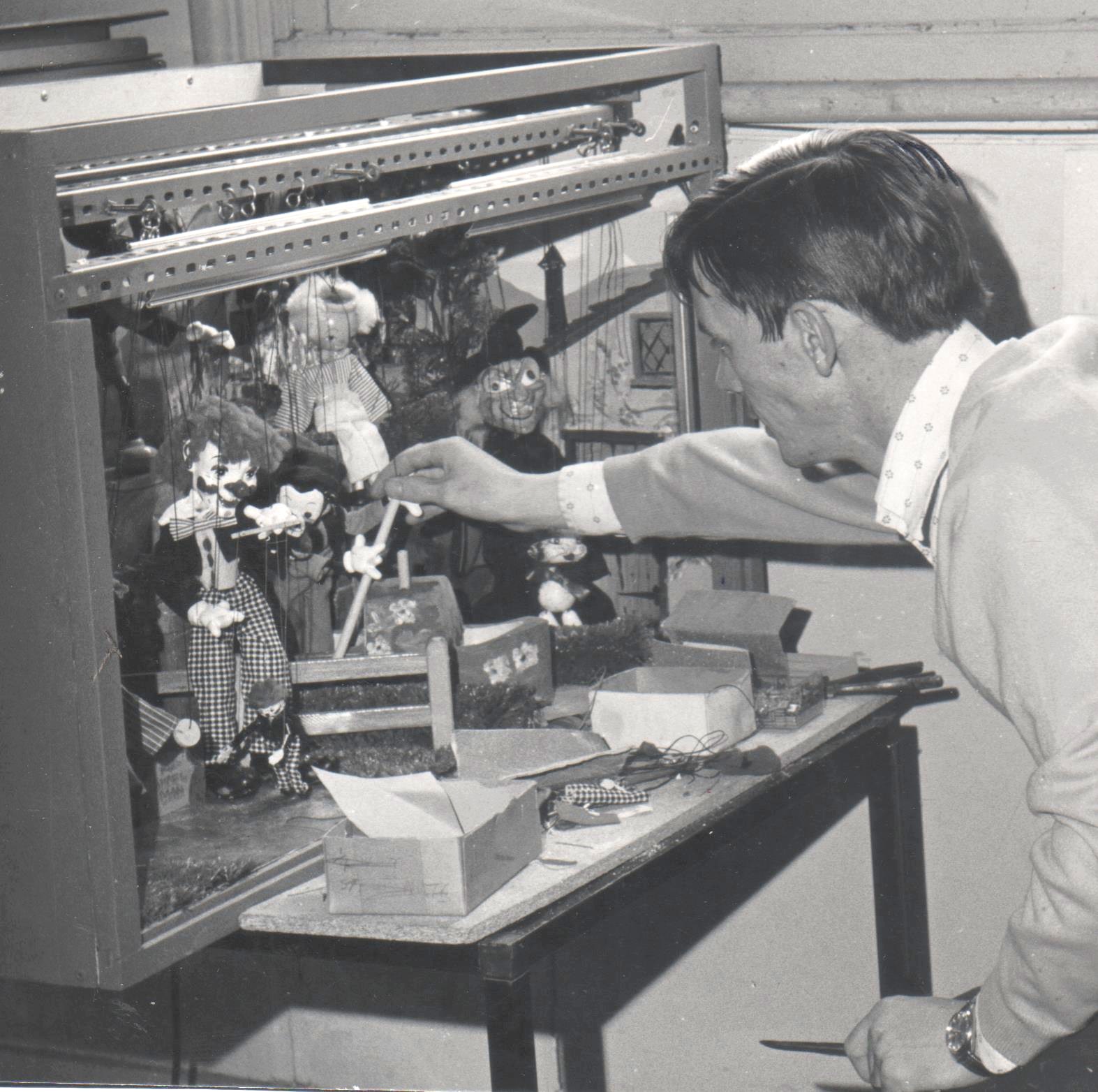 Thus began my life long association with Pelham Puppets. Almost every year until I left school at the age of eighteen, I made the annual visit to Marlborough to work in the factory for a few days or up to two weeks and each time, returned home with puppets, sometimes stacked up so high, I could not see where I was going!

That was  the question. Where I was going? Should I pursue a teaching career, (having got my A-Levels, at school,) or should I make one more trip to Marlborough? My life revolved around puppets! I had spent  my teenage years staging puppet shows at children’s parties, schools and other events in and around my home town of Stone, Staffordshire, as well as in my small, purpose built puppet theatre at my parent’s house; so it goes without saying really.

It wasn’t long before I became employed full-time at the puppet factory. It was a natural development I guess since I was already familiar with many of the puppet making processes and spent the first year or two working for short periods in various departments from moulding, painting, stringing, assembly and woodworking, as the need arose.  This enabled me to gain valuable, hands-on experience of the puppet productions process from beginning to end.

Eventually, I became employed full time working alongside Bob Pelham, almost every working day, with the design and production of the Animated Display Units that were used to promote puppet sales by exhibiting them in shop windows and Santa’s Grottos. I also designed and built the new factory theatre where we staged short performances for visiting school parties and for the factory Christmas party. (However, due to Bob Pelham’s untimely death, the theatre project never reached its full potential and was dismantled a few years later.) 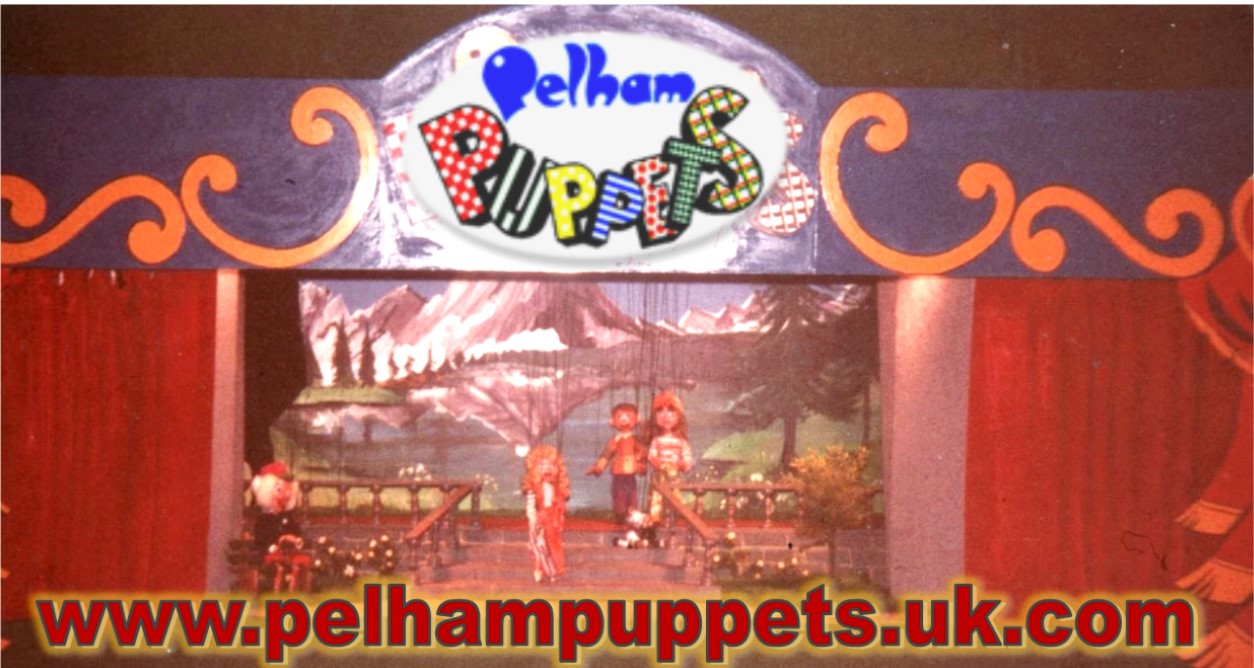 In the run-up to the Christmas periods, I would also go to Hamley’s in Regent Street, London and stage regular performances in store which also served to promote sales and inspire interest in the puppets. Families loved having the opportunity to handle the puppets themselves as well as seeing them in action on a real puppet stage.

When you see puppets hanging up in rows, you can almost hear them sigh when you walk past and neglect to pick up the magical cross-bar that brings them to life!  Because that’s what puppets are all about. They seem to almost yearn for life. They dream of action. Their entire wooden ambition is to become animated.

As Bob Pelham once said, many years ago: “A puppet is not just a toy, but it has to walk, act and dance for someone!” 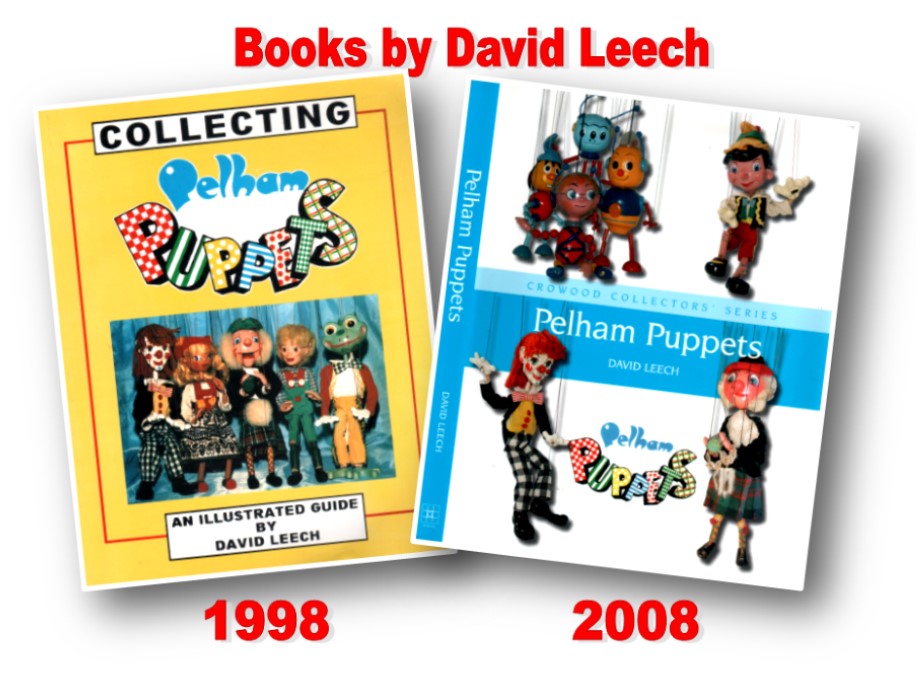 David is the Authorised Historian for Pelham Puppets and has written two books on the subject. To learn more about writing the books visit the Publications about Pelham Puppets page HERE.

To find out more about the History of Pelham Puppets and to see a tour of the original puppet factory, visit the History page HERE.